On the first Wednesday after the midterm break, the Music Performance Area was filled to capacity for the annual Past versus Present debate, known officially as The Daniel O’Connell Memorial Debate. The debate has been held in the College each year since 2006 and was first launched by Fr Conor Harper S.J. and Mr Anthony Kenny (OC’55). In this intergenerational event, Clongownians of past and present vie for the Daniel O’Connell Trophy, which was kindly donated to the Higher Line Debating Society by Mr John Fitzpatrick.

The challenging motion for this year’s debate was ‘This house believes that juries should be abolished in all criminal cases.’ The debate was adjudicated by Ms Justice Mary Finlay Geoghegan (Chair), Rector Fr Michael Sheil SJ (OC’56) and Ms Zita O’Neil. 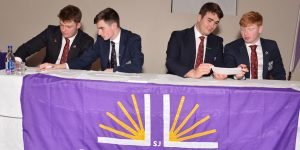 Mr Adrian Gahan (OC’97) opened the proceedings as captain of the government and in doing so set the standard for what was to be a superb debate. The case for the opposition was laid out by captain Ryan McMahon, who boldly played on the word ‘all’ in the motion, insisting that the government had to discredit all trials by jury and not just point to isolated examples of deficient juries. The stakes were clearly high for both sides. The youngest member of the past team and Clongowes’ most recent Classics graduate, Mr John Francis Martin (OC’13), then shocked the house (most of all Hugo O’Donnell) by opposing the Aristotelian jury system. Hugo tried unsuccessfully to lure him back to the present team. Nonetheless, John Francis held his ground and remained loyal to the Clongowes elders. Sean Lysaght then took up the mantle, reminding the house of the importance of being tried by one’s peers as opposed to figures of authority. 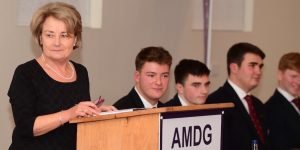 Back to the past, and the third speaker, Mr John Stokes (OC’85), wittily exposed the flaws of the jury system and its vulnerability to crafty, sob-story rhetoric or argumenta ad misericordiam. Hugo O’Donnell then held forth for the present defending the lineage of the jury system from Ancient Greece, through feudal times and down to the birth of the Irish Free State. Mr David Wilkinson (OC’85) concluded the Government’s argument,summarisingtheir case and reminding the house of the manifold pitfalls and imperfections of trials by jury. Sean O’Grady then rounded off proceedings for the opposition, by championing the right of the people to participate in the administration of justice in their own land. 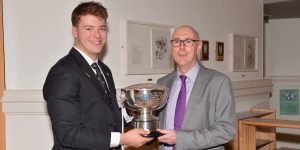 It is a true testament to the strength and ability of both teams that the adjudicators took over half an hour to reach a result. During this time, President of the Clongowes Union, Mr Conor Daly (OC’85), entertained questions and contributions from the floor. When the adjudicators returned to give their verdict, they remarked on the high standard of public speaking and commended the present side in particular, for the fluency with which they spoke without notes or a script. The adjudicators also credited both teams for the analytical and logical way in which they engaged with the motion.

The present team was awarded the victory, with Hugo O’Donnell being selected as speaker of the night and John Stokes of the government claiming the highly commended award for the past. The discussions and reminiscences continued well into the evening as the speakers and their families retired to the castle and mused over a motion for the rematch of 2019. 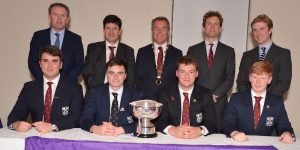 Categories: Clongowes Stories Cultural Featured News of The Past