The Return of the Master Storyteller – Niall de Burca 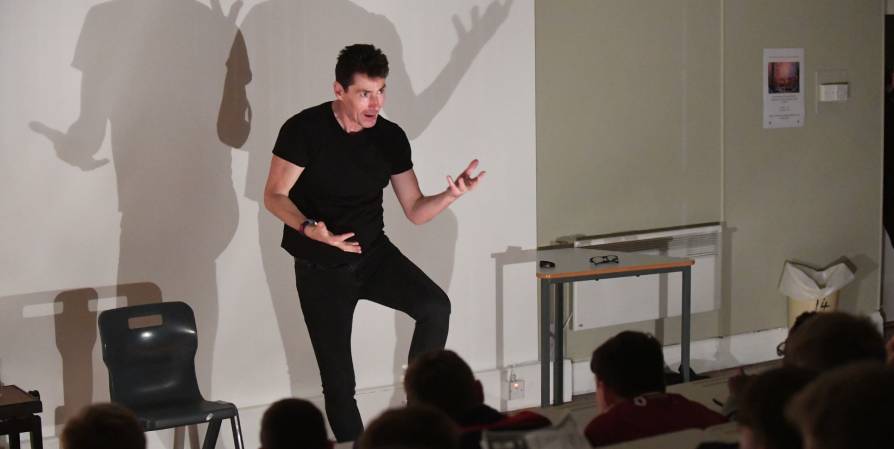 Niall de Burca, Ireland’s foremost traditional storyteller has visited us here at Clongowes since 2009. He has performed in many of our spaces over this time – The James Joyce Library, Green Room, Higher Line Rec Room, to mention a few. This year due to a daytime performance, social distancing requirements and other demands on space, the venue was The People’s Church.

This special space, now nearly 200 years old and closely associated with Blessed John Sullivan was ideal, De Burca’s altar position gave him elevation and, importantly during these times, appropriate distance from his audience of first-year students. Traditionally the entire year would have sat together for Niall’s storytelling but this year he did separate performances for each English class grouping of Elements students.

The masked students spread out on the benches, backs straight, somewhat unsure about what to expect from this statuesque man, dressed in black with a somewhat odd choice of career. Within minutes his voice lured them forward as it’s array of tones and voices had them teleported to a Donegal of ancient Ireland for a story about the Prince of Donegal. The story delivered humour, utterances of Gaeilge, action, romance, tension and trickery. It captivated his audience of digital natives for nearly 25 minutes. A more light-hearted interactive tale followed and the first group of students left in no doubt as to the skills of captivation and delivery this man from Galway possesses. 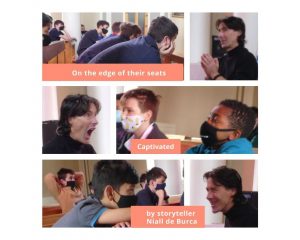 Similarly, the second group were enticed by his multiple voices into a different set of stories, equally, if not more compelling for the fearsome hag appeared, fascinating and chilling the boys in equal measure. Again they were transported by another story of days long passed, a young priest travelling home from Maynooth to Mayo is tricked by a hag, his future apparently destroyed until a cunning Corkonian priest friend intervenes and the hag is outwitted. De Burca ended this session too with an interactive story as he highlighted how the English language had gained words from countries the world over. The session culminated in how it came to be that the Irish are the freckled people.

Students unsure of this storyteller initially, left knowing they’d witnessed a master at his craft and were gifted ancient stories to share with family and friends, in keeping with this great tradition.

We are grateful to Fr Sheil for allowing the performance to take place in The People’s Church and to Bro. Cha for preparing the space.