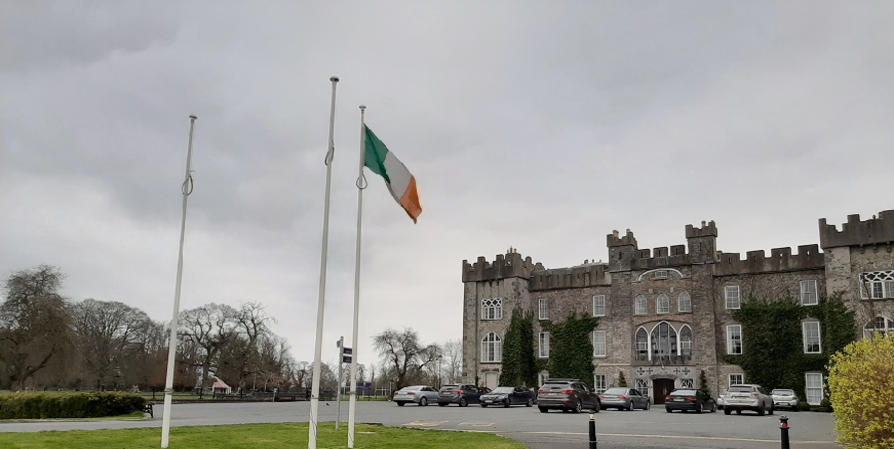 I first met little Anne Marie on this very Easter Monday – 8th April 1985. I was on my first of nearly 20 visits to Lourdes with the Irish Children’s Pilgrimage. She was about 10 or 11 – and, like others with Down’s Syndrome, she was affectionate, tactile, generous and loving – and stubborn…….oh boy – was she stubborn!

As we set off up the steep hill of the Way of the Cross, my job was to explain the figures at each Station –   pointing out Pilate, a Jewish priest, a Roman soldier, Jesus Himself, etc. at the 1st.  As we moved to the 3rd Station [where Jesus falls the first time] – I was aware of Anne Marie becoming visibly upset – and even more so when, at the 4th, Jesus meets His Mother – and when He fell again a 2nd and 3rd time – and so on.  As we arrived at Calvary – she was sobbing away on the shoulder of her Helper. It is customary that, on arrival at the Crucifixion scene, everyone remains in silent contemplation before the dying Christ. At this stage Anne Marie was crying out loud – quite distraught and bawling her head off – much to our embarrassment and the distress of some of the other Children.  She was no better when we saw the Body of the dead Jesus taken down from the Cross and given to His Mother. On the way back down the hill, Anne Marie continued to be inconsolable – weeping and crying.

At we reached level ground, we saw a wide natural opening in the cliff face. Above was a sign proclaiming: Resurrexit sicut dixit, Alleluia! – and there was a huge round stone rolled to one side. As I explained that we never mark Christ’s suffering and death without celebrating His Resurrection – I noticed that Anne-Marie’s behaviour had changed ……. she was now talking away very excitedly to her Helper. As we finished with a prayer and a hymn – I felt the sleeve of my alb being tugged. I looked down and there was little Anne Marie, who had left her Helper and stepped forward. Very urgently, she whispered something to me…………….

I heard what she had said – but didn’t want to hear it (if you know what I mean!) – and I proposed we move on. But, no, Fr Mocky!, she insisted – You’ve got to …… and she repeated what she had said. This second time I couldn’t pretend I hadn’t heard …… but I “opted out” and told her: Go on – you say it yourself.

So out she stepped in front of us all and called on everyone to be quiet – even stopping an Indian Family who happened to be passing by (Mum and Dad and two children) – minding their own business (I did say that she was stubborn!) Now, she said in a loud voice, All together – Three cheers for the Resurrection! Hip!Hip! ……

But the third time there was no room to flee:: All together – Three cheers for the Resurrection! ….. Hip!Hip!

And there we were – adults and children – shamed into sharing in that little girl’s joy at the Happy Ending to the story about Jesus – as we made fools of ourselves with a loud and confident Hurray! –  not simply once – but the full three times!  It was just as Christ Himself had said: If you don’t become like a little child, you will never enter the Kingdom of Heaven! What a lesson we all learned that day 35 years ago – as little Anne Marie insisted we share her new-found joy – just as she had shared Jesus’ suffering as He went up that hill to Calvary.  She could hardly have understood the Latin [He has risen, as He said!] – but the Alleluia she understood in her heart!

Ever since – each time we did the Stations in Lourdes – our Group 61 never ended without three rousing cheers for The Resurrection!! Indeed, some of my readers may well have made fools of themselves as I have dared to follow Anne Marie’s example at Sunday Mass in Clongowes – and, once, with a full congregation in Florida!

Since the lockdown – following the example of people in Italy – we have flown the Irish flag in front of the Castle – and will leave it flying until our invisible enemy retreats from the land. Perhaps you might think of the same gesture of defiance – and fly the flag yourselves – and even ….. even …. open the window – and, inspired by little Anne Marie – call for ……. yes, you’ve guessed it! – Three cheers for the Resurrection!   Go on – I dare you !!!!

So let us thank God for the gift of Faith – thank Him for the gift of little Anne Marie on this same Easter Monday all those 35 years ago!  Fraternal blessings and every good wish to you all for this Easter – and beyond!