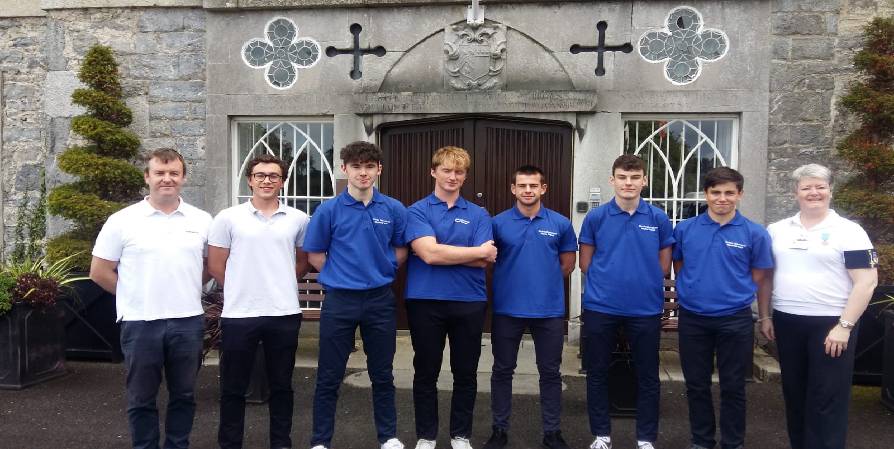 We asked the boys to reflect on their experiences in Lourdes and tell us a little more about their day to day activities. The boys seemed to share the same sentiment: that the Lourdes pilgrimage was transformative and unforgettable, and an immensely important expression of the Clongowes Ignatian ethos.

Interestingly, the boys met with no less than 8 Old Clongownians in Lourdes, a testament to the importance of the pilgrimage for current and past students and the depth of commitment that students of all ages have to become ‘A Man for Others’. Notably, Tommy Inglis (OC’18) was awarded a bronze medal for 3 years of service to the Dublin Arch Diocese pilgrimage. 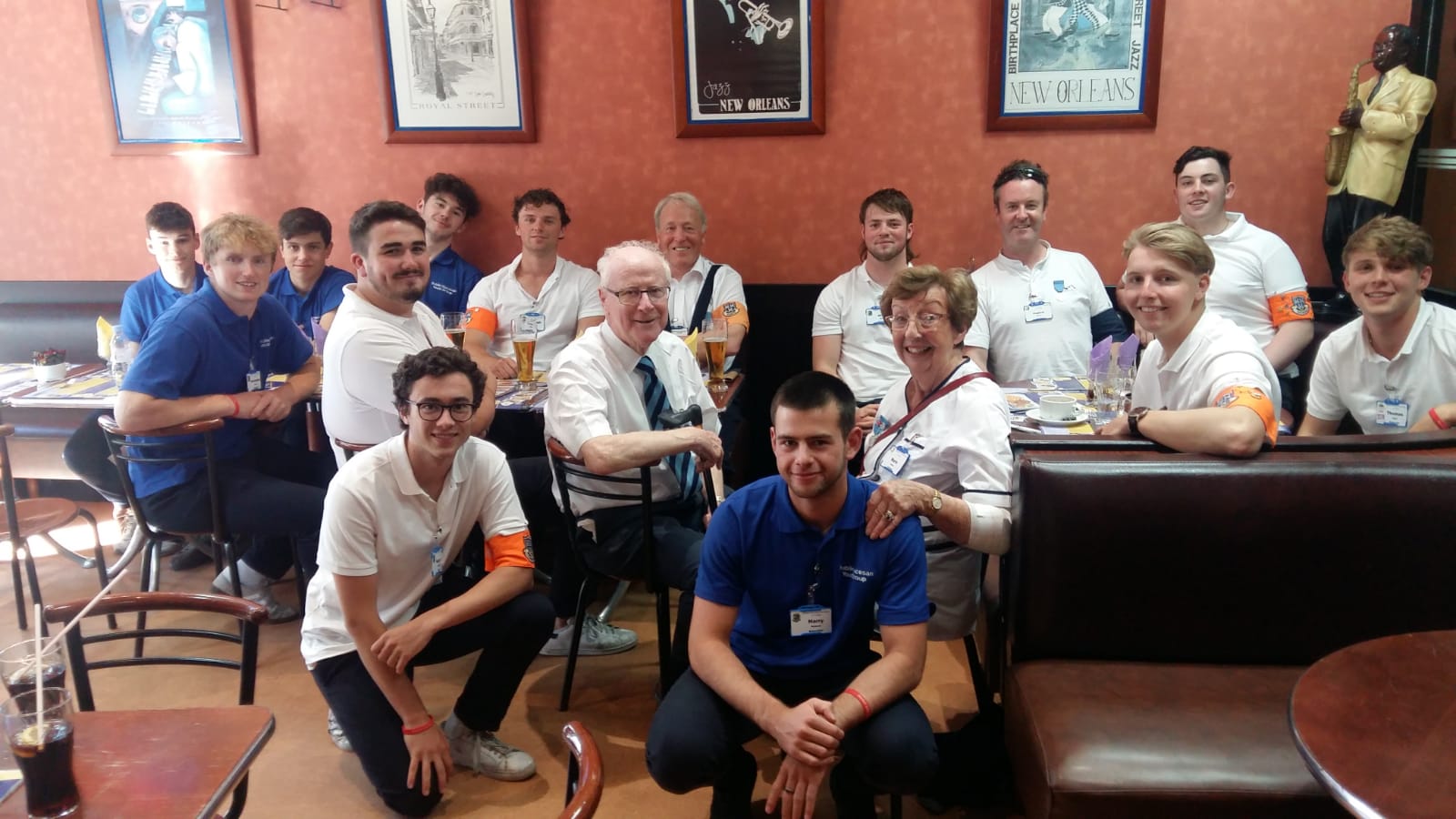 See the Gallery for more images

The group should be very proud of their service to others while in Lourdes and we thank them for sharing their personal experiences with us.

“On the 4th of September, myself, Sam, Harry, Alexandros, Chris, Ms. Lumb, Mr. Marron and Paddy, the Gap, set off from the castle and headed to Dublin Airport to begin our Lourdes pilgrimage. As soon as we arrived, we were on the job, bringing pilgrims through security. The first pilgrim I was with, was a woman named Annie. A straight talker who called it how it was, we had great fun as she joked about some of our haircuts, namely Sam and Harry. As I was working in the wards, I got to meet some truly amazing people. There was Anne, who made me her go-to man to set up any sort of football on her iPad. Betty, the most positive woman you’d ever meet. It was impossible to have a bad day around her. Or there was Mary, who made it impossible to chat with as she turned off her hearing aid. My pilgrimage wasn’t just made by the pilgrims, but by the white shirt’s looking after me. They always kept us busy, not just with work but also games to keep entertained. Most noteworthy was when all the boys in our ward were dressed as old, female pilgrims to trick the hard-working nursing staff. The highlight of my pilgrimage was the camaraderie and friendships we built”.

“I was working on the wards caring for my pilgrims Des, James, John, Ellen and Mary in the hospital alongside 7 other white shirts. I’d start off the day by taking the pilgrims to breakfast. I’d then clean the room by wiping all the surfaces and mopping the floor, after we would do whatever the pilgrims wanted such as taking them to mass, collecting holy water or taking them to town so they could get gifts for their friends and family back home. This would be a great opportunity to talk to the rest of the blue shirts who were in Lourdes from all the other schools and get to know the white shirts too. Many people were there because they enjoyed it so much when they were in the 6th year they had to come back. I enjoyed the stories of all my pilgrims and asking them why they kept coming back. Some came because they had good friends who went as well, others such as James, a pilgrim I grew very close to over the course of the 5 days, came to Lourdes because he loved the story of Bernadette and how much of a big deal Lourdes was. Hopefully, like all my pilgrims and everyone else I met in Lourdes, I will be going back next September as well”.

“We will all deeply miss the unique and memorable week we had the good fortune to experience. What made Lourdes so special to us, was the culmination of the people, location and atmosphere. The atmosphere at Lourdes was indescribable. Everything there was so vibrant and full of color, and there was rarely a frown on somebody’s face. The camaraderie and friendships that we all built at Lourdes were very special, as Dave mentioned. It was also remarkable to see the amount of OC’s that returned this year. It was a big commitment for them to return, especially due to the fact that a few of them were entering college at the time. It was a true testament to Lourdes and it was great to see how much Lourdes meant to them. We are all hoping to be able to go back next year, and we would recommend that you jump at the opportunity of traveling to Lourdes if it is offered to you. It was without a shadow of a doubt one of the best experiences of our lives”.

“Throughout our pilgrimage to Lourdes, there were numerous activities and processions that we attended with our pilgrims and the rest of the Dublin Diocese. The torchlight procession is a more well-known procession that takes place in Lourdes. From the minute we arrived our pilgrims were telling each of us how they were really looking forward to it as it is one of the most talked-about events that take place on the pilgrimage.

It was on Friday night at 9 o’clock. It was amazing to get the opportunity to be a part of it. For me personally it was one of the highlights of the pilgrimage and I know the other four boys feel the same way. In summary, each person takes a lit candle and walks around the main area in front of the basilica while singing different hymns and prayers. We then gather in front of the basilica and listen to the priests’ sermon. People also held up different banners and flags usually a symbol of what country they come from. There were hundreds of people taking part and the atmosphere was one you’d struggle to come across anywhere else. As each person had their own candle is was a magnificent sight, and one, I will never forget. It was about an hour long and we all thoroughly enjoyed it!di

As well as the processions, there were other social events like sing-alongs and dancing nights which were really enjoyable and put a smile on everyone’s face. Even singing a song with a pilgrim could make their day, as they’re so used to being at home by themselves. It reminded us how lucky we are to always be surrounded by our friends and family, and that this should never be taken for granted. We took part in other day to day activities such as acting out the stations of the cross in front of several pilgrims. Each school had a different station to act out and we had good fun putting it together. If one of the pilgrims in our ward wanted to take a trip into the small town of Lourdes to buy some souvenirs, or maybe even for a change of scenery, we accompanied them for the afternoon helping them pick out different souvenirs for their friends and family, or we would just sit and have a cup of tea with them”.