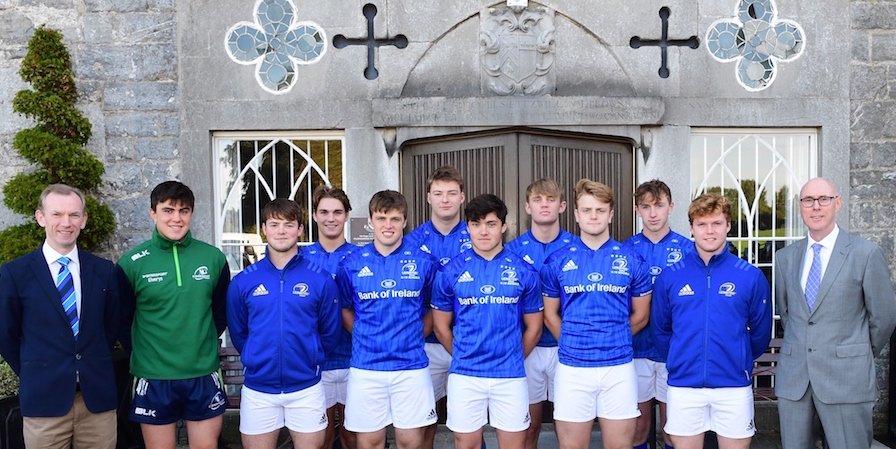 Clongowes has a long tradition of pupils and past pupils playing representative rugby at provincial and international level (including selections for the Lions). Daniel Ross from Hollywood, Co Down, became the first Old Clongownian to pull on the green jersey in 1884. More recently the international strip has been worn by Old Clongownians, Gordon D’Arcy, brothers Rob and Dave Kearney and Fergus McFadden, all of whom also represented Leinster. The current generation of boys are no slouches in this department as Head of Rugby, Mr Daryl Maxwell reports…

Prior to the summer, Dan Sheehan (OC’17) and Michael Sylvester (OC’16) were selected for the Irish Under 20 squad for the World Championships and both won competitive caps in the competition. The same two players have won caps for Leinster ‘A’ in recent weeks in the newly formed Celtic Cup competition.

The summer months saw Clongowes students involved in the Leinster Schools’ Under 18 team, managed by Mr Stephen O’Hara. The Interprovincial Championships took a new format this year with a 10-day event in the University of Limerick. The Leinster team posted a draw versus Munster and had victories against Ulster and the IQ team to win the competition. Congratulations to Barry Dooley, Calum Dowling, Christopher Grimes and David Wilkinson (Poetry), along with Tom Gilheany and Tim O’Brien (Rhetoric), who were all involved in the squad for the whole summer.

Diarmuid McCormack (Poetry) started all games for Connacht Under 18s in the Clubs’ version of the Interprovincial Championships and his team also won the competition, winning all of their games convincingly.

Tom Coghlan, Ryan McMahon and John Maher (Rhetoric) along with Daniel Beggs, Anthony Ryan and Bobby Sheehan (all OC’18) played in the Leinster Under 19 side that was victorious in the Interprovincial Championships, after victories in all three of their games. SCT captain 2018, Anthony Ryan was also named captain of this squad.

Earlier in the year (and further afield) Will Connors (OC’15) represented Ireland at the Hong Kong Sevens tournament, where Sebastian Fromm (OC’13) togged out for his native Germany and Max McFarland (OC’12) represented Scotland. Max qualifies for Scotland through his Glaswegian grandfather and also represented them in the Gold Coast Commonwealth Games.