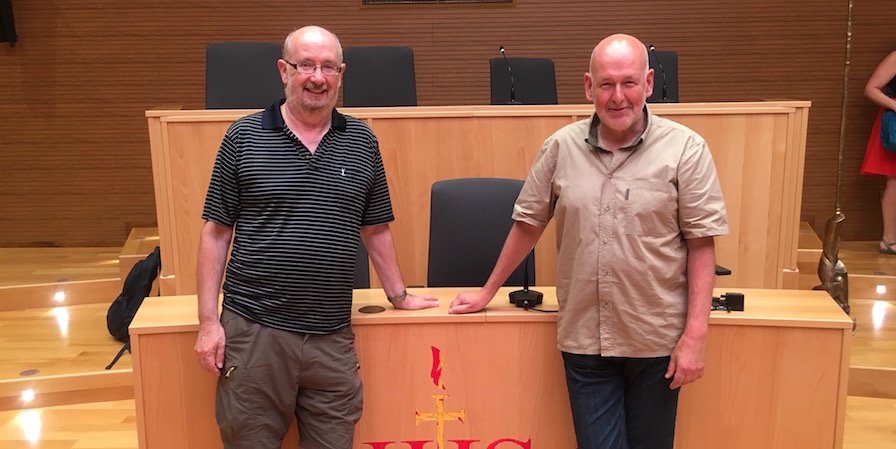 In July of this year, Assistant Headmaster, Mr Martin Wallace and Head of Communications, Mr Declan O’Keeffe (pictured above in the Jesuit Curia in Rome), along with four other teachers from Jesuit schools in Ireland and fourteen from our counterparts in the United States, took part in an Immersion Course offered by the Institute for Advanced Jesuit Studies in Boston College. The in-depth (and packed) programme comprised a one-week road trip across the north of Spain from Madrid to Barcelona followed by a second week in Rome.

Both Martin and Declan are veterans of several of the ‘Footsteps of Ignatius’ pilgrimages that have been organized by the Irish Province over the last decade and were familiar with many of the sites visited in Spain, but this course (which is a three-credit module of the Certificate in Jesuit Studies offered by Boston College) was at a different level to anything they had previously experienced. The (very academic) course examined the historical and spiritual contexts for the foundation of the Society of Jesus and its propagation.

The Certificate’s experiential learning and pilgrimage offers participants informed, scholarly direction and unique opportunities to critically examine the intellectual and spiritual foundations of the Society of Jesus through travel, readings, group discussions, and personal reflection. And – boy did we do that – plus a lot of writing! On each of the three weeks before we set foot in Spain we were obliged to read prescribed texts and submit written responses to them in small on-line discussion groups. Then we hit the ground running. 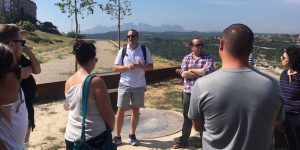 The early Jesuits and ‘the pilgrim’ Ignatius

The first week saw the group visiting many of the locations associated with the early Jesuits and ‘the pilgrim’ Ignatius from Arevalo to Manresa by way of key Ignatian sites such as Pamplona, Loyola and Montserrat. We rarely spent more than one night in the same town and much of the reading, writing and discussion took place on the ‘bus and on the hoof. Each day one or more of us had to submit written on-line reflections on the institute’s website, while we also had to present oral reflections to the group over the course of the fortnight as well as at the regular formal seminars.

The next seven days were based in Rome and focused on the foundation, consolidation and subsequent spread of the Society and the lives of the young Jesuits who ‘set the world on fire’. While there was little bus travel involved in the second week, the schedule was no less busy and much shoe leather was burnt on the pavements of the Eternal City, as we studied the ways and places in which the fledgling society was conceived, born and nurtured.

We would not like to give the impression that it was all hard work; indeed much enjoyment was had as we bonded with our fellow pilgrims and made new friendships at home and abroad. And now, in the wake of our peregrinations across Spain and into Rome in the footsteps of ‘the pilgrim’, we are excited, enthusiastic and only too willing to roll up our sleeves and get stuck in as the new academic year rolls around.

Declan O’Keeffe’s reflection on the Jesuit Immersion Course may be read here. 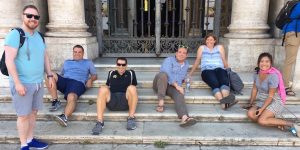