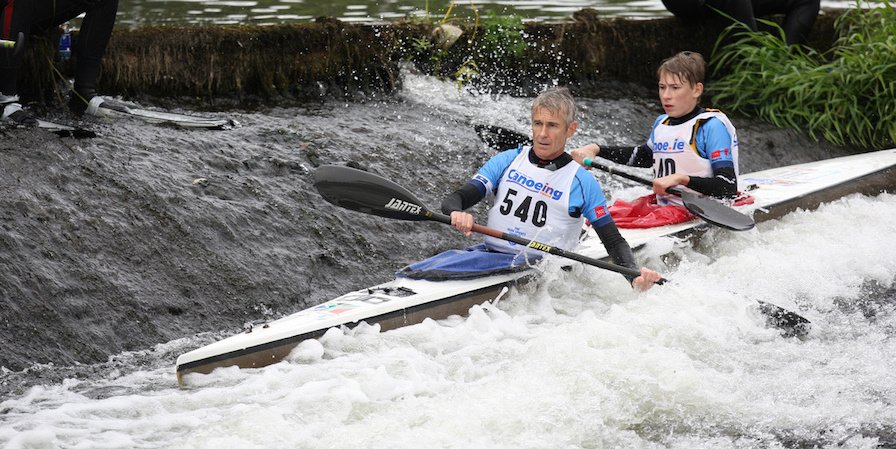 Not paddling their own canoes…

The ancient and noble sport of canoeing has been rekindled in Clongowes in recent years and last Saturday (15th September) was another red letter day as the father and son pairing of Eddie Martin (OC’86) and Oscar (Poetry) completed the Liffey Descent 2018, just 33 years after the senior partner last entered the race – when he was Oscar’s present age! Meantime, elsewhere on the water, Eddie’s brother, Sean (OC’84) was quietly taking 3rdplace in the Over 49 singles.

Although Oscar is something of a veteran of the Schools’ (or Junior) Liffey Descent (here and here), this was his first time to do the full adult version of the event. The Liffey Descent is part of the International Canoe Federation Classic Series and Oscar and Eddie had also completed another of the Classic Races, the Descenso Del Sella (Sella Descent), in August 2018 alongside another Clongowes father and son team in the persons of Patrick Maloney (OC’87) and Aran (Rudiments).

Oscar and Eddie are pictured above at the Palmerston weir on the descent, which was altered considerably this year by the extended summer drought, which meant that the water level was unusually low. The usual terror of giant waves and stoppers was replaced by gruelling shallows, general chaos and traffic congestion and an energy sapping lack of assistive flow along the 29km course!

A Powerhouse Once Again

Previously Clongowes had been a Schools’ Canoeing powerhouse especially in the 1970s, 1980s and early 1990s with many years of friendly rivalry with The King’s Hospital, another stronghold of paddling. Both schools completed for the prestigious Peter Storm Team Trophy with Eddie Martin and Patrick Maloney racing together in the Clongowes team during the 1980s.

Now, through the next generation (including Tadhg Maloney of Rhetoric 2018) canoeing in Clongowes is back on track (as it were). Were that not enough – and under the stewardship of Director of Sport, John O’Donoghue (no mean paddler himself) – we are shortly due to take delivery of a new trailer and boats that should ensure that the flame continues to burn for future generations of oarsmen.