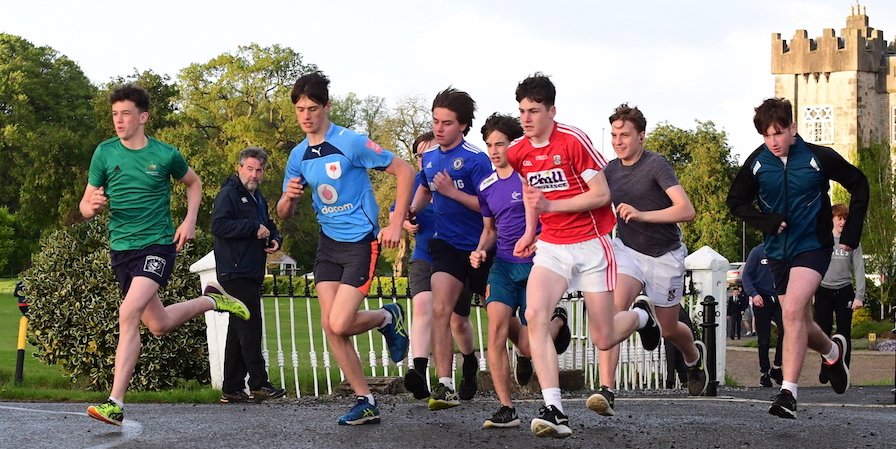 The origins of racing ‘The Triangle’ in Clongowes, while hardly lost in the mists of time, are certainly unclear. It is such an obvious course that it is likely that boys ran and raced it as long as boys have run and raced in Clongowes. As regards the modern event, Fr Bruce Bradley, in The Clongownian, 1994, points out that ‘an idea mooted by Fr Liam O’Connell during his headmastership was brought to fruition [this year] by Mr Brian O’Keeffe: races round the “triangle” of front and back avenues for all-comers within each line.’

The latest running of the race took place on Wednesday, 9th May in cool, overcast weather and, while none of the remarkable Jack O’Leary’s (OC’16) records was threatened, there were some interesting features in the times. The 7.42 posted by overall winner James Coonan (Syntax) was more than enough to defeat the contestants from the two years above him, while the 7.59 clocked by young Padraic Spillane (Elements) bested all bar James in the five years above him – including his own brother, Michael, in Grammar! Indeed the three best placed contestants in Third Line outran their older brethren in both Lower and Higher Lines, save for James.

Congratulations to all who took part in a very enjoyable event and many thanks to the Prefects and Gaps who made themselves available on the night to ensure the success of what has become a notable occasion in the ongoing history of Clongowes.