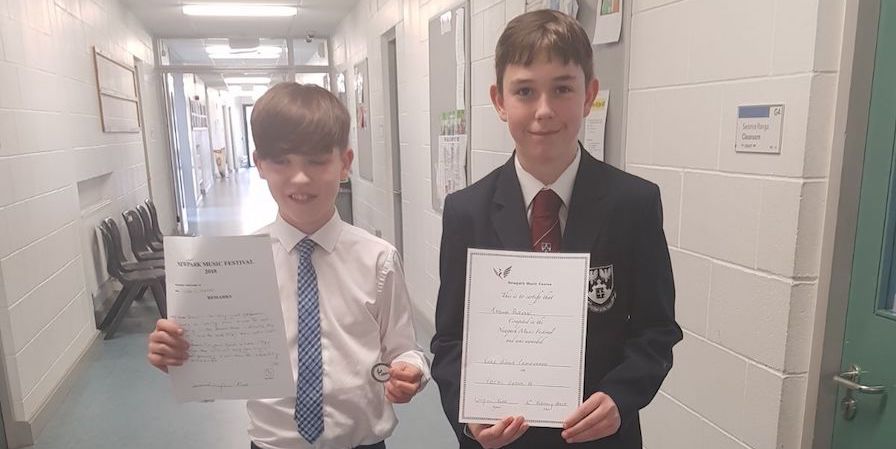 While most students were on a well-deserved break during the February mid-term, two singers from Rudiments, Sean Lannen (left) and Thomas Breen, travelled to Blackrock in Dublin to represent Clongowes at the Newpark Music Festival. This Festival has been running for 27 years and has seen some of the best young musicians in Ireland compete for various prizes in that time.

Both Sean and Thomas entered the Under 14 Vocal Solo, which was adjudicated by internationally renowned soprano, Ms Virginia Kerr. Sean had the unenviable task going first in the competition, singing Jay Althouse’s arrangement of Homeward Bound. For Thomas, who is only 12 years of age, this was his first occasion to sing at this age group. He sang Edward Elgar’s Ave Verum Corpus and was awarded an excellent 88 marks, receiving the award of ‘Very Highly Commended’ and finishing in a very creditable 4th place.

It was to be Sean’s day however, as none of the following competitors bettered his opening performance for which he received 94 marks and was awarded 1st place. This meant he qualified for the prize-winners concert, another competition in which winners of all categories performed. This time he was second last to perform, but delivered another excellent performance and was named as the best Junior Singer, receiving the Leo McGrath Cup.

Ms Kerr commented on the high standard at the festival and complimented both Sean and Thomas for their professional manner, noting how they both thanked their accompanist Ms Anne Conaghan during the applause after they had sung.

Their singing teacher Mr David Scott would like to thank the parents of Sean and Thomas who took time out of their mid-term break to bring them to Newpark, and to Ms Anne Conaghan for accompanying them.

Sean Lannen is no stranger to readers of these blogs; less than a year ago we covered his success in the Wesley College Interschool’s Music Festival, in the Under 14 Solo Singing competition, where he was awarded first place. More here.