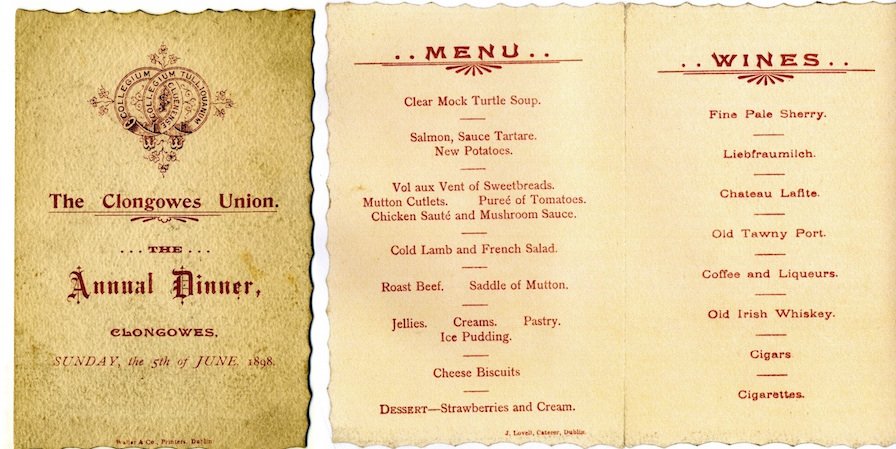 ‘The Clongowes Union means the desire of Old Clongownians by coming together to be able to renew old memories [and] to see once again old familiar faces’. These words of John Redmond, M.P., (Vice-President) proposing the toast of the Clongowes Union at the second annual dinner, continue to ring true in the ears of Clongownians past and present.

It is now more than 120 years since the inaugural dinner of the Clongowes Union, which was held in the Shelbourne Hotel, St. Stephen’s Green, Dublin on Tuesday 16th November, 1897. The 122nd sitting of the dinner will take place in this 204th year of the college, not far from there in the Ballsbridge (Jury’s) Hotel, Dublin 4 on Friday, 9th February at 19.30. (See below for details of tickets.)

The event that took place in 1897 was not the first annual dinner of Clongowes alumni as The Clongowes Union Centenary Chronicle records ‘Annual’ Dinners in 1822 and 1826 and speculates that there must have been other ‘annual’ social gatherings, perhaps in the aftermaths of the Past v Present Gravel, Cricket and Rugby matches. The origins of the modern Union Dinner lie in an after-dinner speech by the Rector, Fr Matthew Devitt, SJ (1865-9) following the Past v Present cricket match on 24th May, 1895, in which ‘he proposed that a Clongowes Association be established and that an Annual Dinner should be held in Dublin’ for past pupils of Clongowes and Tullabeg.

Over two years later representatives of both sets of alumni met in the house of Chief Baron Christopher Palles on Dublin’s Fitzwilliam Place and founded The Clongowes Union. Officers were appointed and resolved ‘that, subject to permission being obtained from the Rector of Clongowes, a General Meeting… was to be held each year at Clongowes on the first Sunday in June, and that there be a members’ Dinner in connection therewith at Clongowes on the same day.’

It was further decided that the first annual dinner be held in Dublin in 1897 in advance of the first General Meeting in the school the following year. According to The Clongownian some 205 members sat down to dinner including ‘the leading men of every profession’. In addition to the first President of the Union, Chief Baron Christopher Palles and Fr Devitt, the ‘Top’ table included such luminaries as: the Provincial, Rev Patrick Keating, SJ; Rev, William Delany, SJ (President, University College); John and Willie Redmond, MPs; Rev John Conmee (later immortalized by James Joyce) and Sir Peter O’Brien (Lord Chief Justice of Ireland). Following a toast to the success of the Clongowes Union, the President spoke of his hopes for the fledgling organisation and foresaw the growth of overseas chapters of the Union in the future as well as the potential for what we now call social networking.

The next dinner took place in the college refectory on 5th June 1898, following the first Annual General Meeting of the Union and it is interesting to note that the Higher Line students attended. The remarks of John Redmond noted above concluded timelessly with the hope that the Clongowes boys will prove ‘worthy of the high traditions, the glorious traditions, they have inherited, by doing honour in the future to Clongowes, alike by the fidelity to their religion, and by devotion to their country.’

If you would like to participate in the continuation of a little piece of history by attending this year’s dinner tickets are available here.

Categories: Clongowes Stories News of The Past