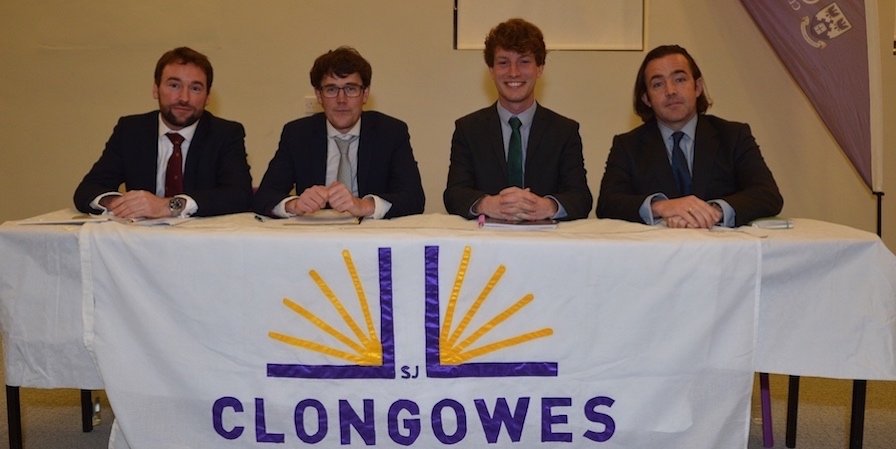 The ghost of Daniel O’Connell must have been well pleased by the standard of debate that took place for the trophy named in his honour in Clongowes on Wednesday night (8th November) before an audience of some 60 students, staff, parents and Old Clongownians. The Liberator was a pacifist but he won’t have objected to the verbal fisticuffs and trading of metaphorical blows that ensued between the hip young gunslingers of Rhetoric and the more seasoned campaigners, who came to represent the past in the annual debate for the Daniel O’Connell Memorial Trophy. The showdown was marshalled by the wily President of the Clongowes Union, Joe McVeigh (OC’96), who ensured that no blood was spilt and that Queensbury Rules were observed at all times.

The Present team was led by ‘Captain, their Captain’, Jack Dowling (whose proud father Shane had served on a winning Present debating team in 1983) and comprised Karl von Finckenstein, Ben O’Shea and David O’Connor. They had the unenviable task of proposing the tricky motion that “This house believes that the value of history is overrated in a world where no one can turn back the clock”. In this endeavour they were vigorously opposed by a team from the Past captained by Peter Griffin (OC’87) in the company of Peter Lavery (OC’96), Michael McCormack (OC’02) and the relatively callow Tom Cantillon (OC’14).

Jack led his men into action with a measured address that set out the stall for the Present and made the clever (and ultimately turning) point that they were not arguing that history had no value but merely that such value is overrated today. Jack was ably supported by Karl von Finckenstein (debating in his second language), recently crowned SCT vice-captain, Ben O’Shea and the urbane David O’Connor. All four made impressive presentations and were neither bloodied nor bowed by the occasional interjections from their predecessors on points of order.

The opposition gave as good as they got with the laconic Peter Griffin and the effortlessly witty Peter Lavery playing to the crowd on occasion. Captain Michael McCormack was more measured in his approach as he outlined their arguments while the very impressive Tom Cantillon owned the floor when on his feet. Tom is studying Law and Politics in TCD and it was easy to imagine him addressing a court of law or a parliamentary chamber alike. Peter Griffin’s jibe that one of the Present team was (shock horror) actually a history student was neatly rebutted by Jack’s observation that none of the custodians of history had taken the subject at third level.

When the sparring was done the Adjudication Panel led by Mr Justice O’Hagan (OC’65), aided and abetted by the Rector, Fr Michael Sheil SJ (OC’56) and Ms Zita O’Neill withdrew to consider their verdict and the motion was thrown open to the floor. Contributions were made by the several constituencies present including several very impressive interventions from the younger students. A straw poll proved to be a straw in the wind as the house – by 35 votes to 23 – felt that the Present had carried the day and such was proven to be the case when Mr Justice O’Hagan gave the verdict.

In his summing up he praised the high level of debate on display before singling out Ben O’Shea as the unanimous choice for Speaker of the Night with Tom Cantillon Highly Commended. Votes of thanks were recorded to all who made the evening such a success, in particular Messrs Adam Conry, Frank Kelly and Mark Lochrin (OC’70), the coordinator for the past, who is instrumental in recruiting speakers each year, before the Headmaster, Mr Lumb brought matters to a close with his own tributes and the assembly debouched to the castle for a fine repast – and some more debate…

Pictured above are the Gentlemen of the Past: Michael McCormack, Peter Lavery, Tom Cantillon and Peter Griffin.