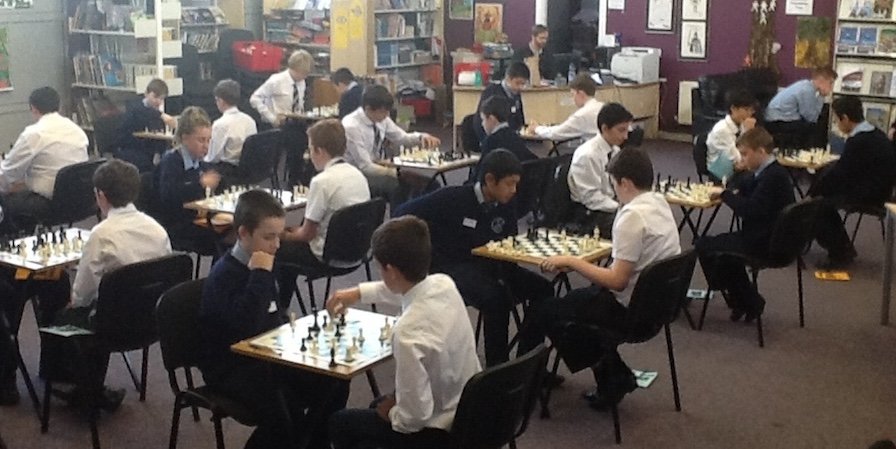 Contrary to the views of Roy Keane, who never quite managed to represent his school in chess, the scars are still evident- chess is a very physical game, not in the sense that one is likely to incur an injury but in the energy expended and in its competitive intensity. This was very much in evidence when eight Under 14 teams from four schools participated in the chess mini-tournament hosted by St Kevin’s College, Crumlin in the week before mid-term (October 26th). Our two teams, made up of seven Rudiments and one Elements student, competed with St Kevin’s College, St Paul’s of Brunswick Street and St Aidan’s from Tallaght in what proved to be a very competitive and entertaining half-day of chess.

Our A team, which acquired the sobriquet Peaky Blinders, was represented by Alex Taaffe, John Malpass, Harry McDermott and Inigo Lecumberri. Although they drew with St Paul’s in the final round, they pipped them for first place on account of games won during the day, scoring 8.5 out of 12. Our second team, represented by Nikolai Rager, Charles Kedde, Matteo Snijders and James Keenan (our only Elements representative), suitably nicknamed Good Guys, almost won third prize with a score of 6 out of 12. Special mention must be made of the performances of Nikolai and John, both of whom won all of their games. Nikolai was well worth a place on the A team, but we were being greedy in trying to take two sets of medals. The boys enjoyed the occasion and represented their school admirably.