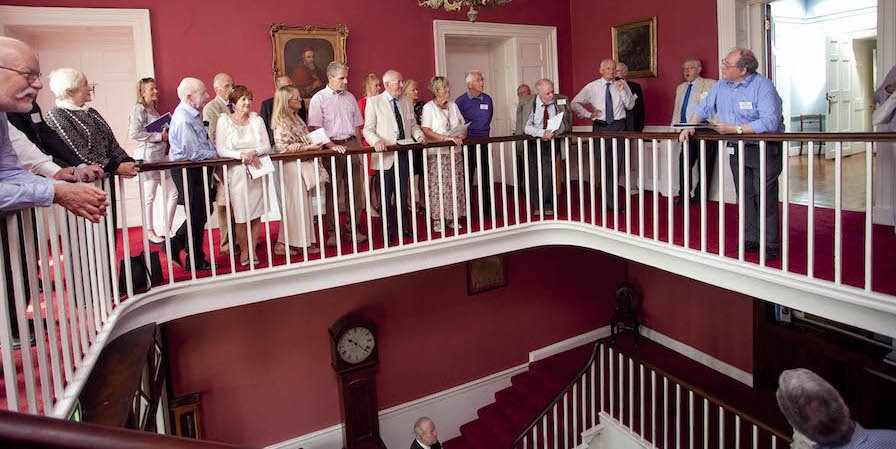 As is now the custom every June, Clongowes Foundation welcomes all Old Clongownians, who have left the College forty years or more, to enjoy Fr. Peter Kenney Day. This year (Wednesday 14th June) was no exception as over OCs, ranging from 1945 to 1972, turned out to enjoy a day of reunion and celebration. The gentlemen and their guests shared the Liturgy in the Boys’ Chapel which was celebrated by Fr. Michael Sheil SJ Rector OC’56 and the occasion was embellished by the liturgical music provided by Cyril Murphy OC’80 on piano with accompanied by guest cellist Ms Jane Hughes.

Martin Nugent, retiring Chair of Clongowes Foundation, hosted tours of the College spanning the Castle, Museum Library and the 1929 building across to the transformative living and learning spaces of the science, art and technology building, the sports hall and the new swimming pool under construction. Autumn 2017 will see the opening of this exceptional 25m indoor facility, which will add a significant resource to Clongowes. The financial commitment of alumni, parents and friends is a realisation of a generosity of spirit and support which enables all these development plans of the Board of Management.

From noon guests were enlightened and regaled with a selection of talks to choose from:

Once again Ann Cooke and her wonderful team in the refectory excelled themselves with a sumptuous buffet lunch for all the Old Clongownians and their guests (even if it was not quite the same menu as they reminisced about their own Clongowes Wood College days!).

Peter Kenney was born in Dublin on 7th July 1779, the son of lower middle-class parents. As a boy he was taught by the ex-Jesuit Father Thomas Betagh (the Jesuits had been suppressed in 1773) and apprenticed to a coach maker. Father Betagh recognised his outstanding promise and sent him, with others, to the recently founded Carlow College, to pursue ecclesiastical studies. His hope was that Peter might be able to join the Society of Jesus, if it was restored. Peter went from Carlow to Stonyhurst and then on to Palermo in Sicily, where he was ordained in 1808. Three years later, only months after Betagh’s death, he came back to Dublin, missioned to prepare the way for a restored Jesuit presence and, more specifically, to open a college.

Having served for a year as vice-president of Maynooth at the request of the Irish bishops, Kenney purchased Clongowes and, despite some opposition, succeeded in opening it to scholars in June 1814, a few months before the Society of Jesus was restored worldwide. He served as superior of the mission and first rector of Clongowes until 1817 and then, having purchased Hardwicke St (which would evolve to become Belvedere College) and Tullabeg (eventually amalgamated with Clongowes in 1886), he was sent by the Jesuit General as official Visitor to the U.S. where he spent a year in Maryland, regulating the affairs of the mission there.

On his return, Peter Kenney became superior of the mission and rector of Clongowes for a second time in 1822, before going once more as Visitor to the U.S. in 1830, just after Catholic Emancipation. This time he spent almost three years there and established Maryland as a vice-province and Missouri as an independent mission. He also reformed and reorganised both Georgetown University and St. Louis University, ensuring their long-time viability.

Back in Ireland, he became vice-provincial (Ireland was now a vice-province) in 1834 and superior of the new church and residence of St. Francis Xavier in Gardner St. Kenney was the pre-eminent Catholic preacher of his day in the English-speaking world, as well as a most influential spiritual director, confessor and retreat master. He was a crucial influence on the Loreto Sisters, the Irish Sisters of Charity and Irish Christian Brothers in the years of their foundation. He was also an outstandingly gifted administrator.

As his health declined, Fr Kenney was relieved of his posts as vice-provincial and local superior. Father Peter Kenney died on 19th November 1841 in Rome, where he had gone in the hope of recuperation and to write a memoir of the epic events through which he lived.