In the Mountain Kingdom 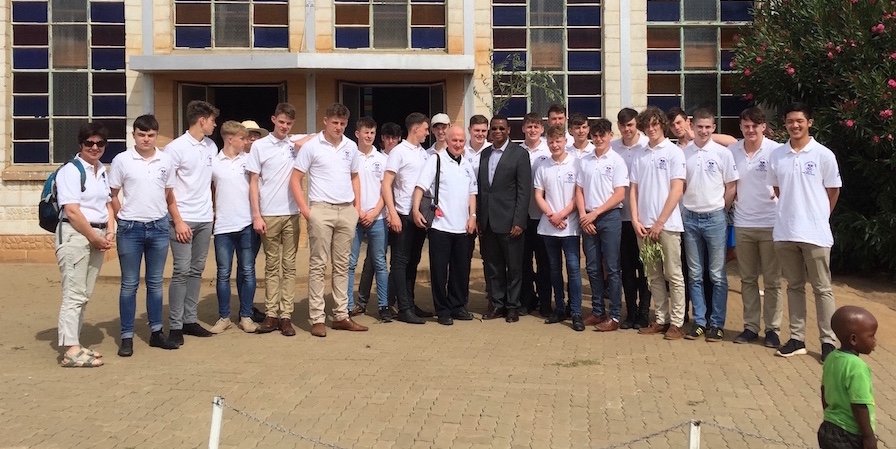 People become people through other people

On April 1st 25 pilgrims from Clongowes Wood College set out on this year’s African Immersion Experience to Malealea, Lesotho. Having had a hiatus for the past three years, the return of the trip was widely anticipated by all travelling – both staff and student alike. The Poetry boys set off on their journey, aided and abetted by the Rector, Fr. Michael Sheil, Ms Liz Griffin of the Ethos Department, Mr Garry Corcoran, the group leader (later to be known as the ‘great leader’) Mr Cormac Rochford and GAP Student Andrew Cheok, with trusty go pro camera in hand to document our travels, made up the final member of the touring party.

After a grueling journey of some 36 hours through Ethiopia and Johannesburg we arrived at the Malealea Lodge to rest weary minds and bodies. A brief meeting with the Malealea Development Trust (MDT), led by the chairman Mr. Tello Moeketse, the next morning allowed the boys their first experience of interaction with the local people of Malealea, colloquially known as the ‘Basotho’. The trust would work alongside the boys on community projects and all were immediately struck by the welcoming demeanour of the staff. We then enjoyed a relaxing afternoon taking in the breathtaking surroundings of the ‘Mountain Kingdom’ while on a tour of the village with the MDT staff. One group was particularly fortunate to meet the town chief and was serenaded with a welcoming song to which they replied with equal enthusiasm, if not quite equal quality!

Keen to get stuck into their development work, the boys rose early on Tuesday morning and set off for the community centre, where the instillation of a playground was a priority. It was clear from the beginning that this group of young men was determined and work that was expected to take a number of days was completed in the first, a fine tribute to the tireless work ethic and attitude that was evident in the boys throughout. The playground was concluded on Tuesday evening, much to the joy of the children from the local primary school who inquisitively approached their visitors and their new play area.

Visits to the local secondary school and library were also part of our visit and it was here that the boys encountered perhaps some of the more profound experiences on our journey. The pilgrims enjoyed games with the children of the Malealea secondary school and were paired with a ‘buddy’ for the afternoon. Many began to realise the privilege that education in Ireland is from talking with the schoolchildren. They had aspirations to be nurses and teachers but the drop out rate among secondary school pupils is very high. The boys presented gifts to the facilitator of the library and teacher in the local secondary school, Ms Marian Drew, including books for primary school children, pens and pencils, which were received with rapturous joy by the schoolchildren.

Immersing themselves in the local community was central to the boys’ trip allowing them to experience life in the rural village and to buy into the Sesotho philosophy of ‘Ubuntu’, championed by Cardinal Desmond Tutu and loosely translated to ‘people become people through other people’. Homestay visits in particular stood out for many of the boys as a highlight of the trip during our refection periods and this again is testament not only to them but to the local people of Malealea, who warmly welcomed us into their homes and lives without hesitation. The annual football game between the natives and the European visitors was an entertaining affair but a stalemate in normal time produced a tension packed penalty shootout where the local team won out.

The Jesuit philosophy of finding God in all things was a strong element of the trip, not least when we joined the local congregation of St. Thomas’ parish on Palm Sunday. The Mass lasted some three hours, putting even the most spectacular of celebrations under Mr Murphy’s conduction in Clongowes to shame, as the warm welcome of the Basotho was palpable during the celebration. Fr. Sheil, as celebrant, and GAP student Andrew Cheok as a minster of the Eucharist, represented Clongowes on the altar, fondly earning him the name of ‘Brother Cheok’ for the remainder of our stay! The service concluded with our rendition of the Clongowes anthem while in Lesotho ‘It’s you that builds community’ appeared to go down a treat with the parishioners of St. Thomas.

As our trip drew to its conclusion the boys spent a short amount of time in Johannesburg visiting a number of sites including the SOWETO Township before departing for home. All landed back safe and sound in Dublin airport on Good Friday morning to family and friends ready to relive the tales of a wonderful, fun filled and eye opening experience. The immersion experience allows those who travel the opportunity to display faith in action by helping those who need it most. Although out trip lasted merely ten days it is clear from the boys’ reflections, expertly facilitated every evening by Fr. Sheil in the lodge, that their encounters with the people of Lesotho broadened their perspective of our world, and most importantly, their role in it.

As the old saying goes the devil is in the detail and the time, energy and thought put into the trip before our departure by fellow accompanying staff members ensured its success. For this, a huge word of thanks must go to Mrs. Liz Griffin whose organisation of the logistics allowed the boys to enjoy a seamless and trouble free experience. Mr. Cormac Rochford, the leader of our tour, was infectious with his positive attitude throughout and kept all in good spirits even in the most tiring of circumstances, in addition to providing the group with one if its most loved members, Iggy a stuffed bunny who became our mascot. Whether through words of encouragement while out working, replicating the way of Ignatius in our evening examens, facilitating our evening masses, or indeed, enjoying a few cold ginger beers, Fr Sheil was a constant reminder to the boys of our purpose in Lesotho; as servants of Christ and pilgrims in our devotion to God through our journey. On behalf of myself and all of the boys travelling a huge word of thanks to all.

Finally, to the boys of Poetry who accompanied us, it was a pleasure and a privilege to share such an experience with a jovial, hard working, and precocious group of young men. Malealea will live long in the memory of us all, but you can be equally satisfied and assured in the knowledge that you have made your mark. Malealea will cherish you and your contribution in its memory for many years to come.