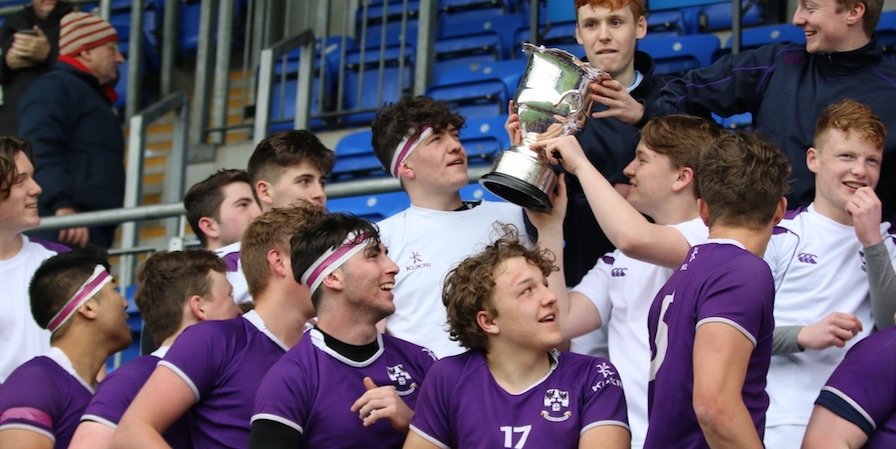 It may have come as something of a (pleasant) surprise to some to note that the cup rugby season for Clongowes had not terminated with the departure of the Senior Cup Team in the semi-finals of their competition. Far from it – the Senior Fourths, under the guidance of Messrs Liam McGovern, Padraic Cribben and erstwhile School Captain, Rudiments Prefect and ‘local boy made good’ David Fagan – had been quietly making their way through the rounds of the Forster Cup to the final in Donnybrook last Thursday (April 27th) where they met old rivals, St Michael’s College. Embedded correspondent David Fagan (an SCT valedictorian with the cup winning team of 2000) sent us this report from the front lines…

Clongowes started brightly and carried ball very effectively through Cian Gahan (Joint Captain), Michael Colivet and Marcus Hobbs. Although the lineout struggled early doors, two excellent turnovers by Ollie McDermott and Joe Bullman gave them excellent field position and a lineout in the St Michael’s 22. A great take by Bullman and carry by Sean Butler brought Clongowes to the 5m line, where some ‘up the jersey’ pick and goes drained the St Michael’s defence and allowed Ollie McDermott to crash over from close range. Liam Callanan struck an excellent left footed conversion from the right hand side to leave his side leading 7-0 after 11 minutes.

St. Michael’s found a foothold in the game over the next 10 minutes, enjoying plenty of territorial advantage and piling the pressure on the Clongowes defence. A number of penalties from very kickable positions were turned down and a tap and go was stopped just short of the Clongowes line. Another penalty award and a final warning for Clongowes resulted in the 3 points being taken and the half time score line read 7-3 in favour of the Clane outfit.

Clongowes struck first in the second half as the excellent and composed Liam Callanan (Joint Captain) stroked home a penalty from the 10m line to lead 10-3. Both sides showed excellent grit and determination as the defences dominated. A yellow card to the electric Clongowes stalwart Freddie Stewart, gave St. Michael’s momentum and a kick to the corner gave them excellent platform in the Clongowes 22. From the lineout, St. Michael’s pressed and pressed but huge tackles from Butler, Hobbs, Bullman and Colivet kept the boys in blue out. McDermott then held up a try scoring chance, as the 7mins sin bin ran out. However, one final play with numerical advantage from a 5m scrum led to St. Michael’s scoring out on the right hand touchline. 10 points to 8 and the fight was on. Crucially, the St Michael’s conversion slipped to the left of the posts and Clongowes retained a slender lead.

With 13 minutes remaining on the clock, St. Michael’s sensed an opportunity but some clever tactical kicking from Jack Reilly and Liam Callanan kept the D4 school pegged in their own half. Huge hits and strong carries meant tired bodies, and Clongowes made a number of substitutions, with Adam Kennedy, Pete Kiernan and Cillian O’Neill all making their presences felt. Alexander Nulty had a superb game on the right wing, with some breath-taking catches, while John Durkan and Sean Donovan worked tirelessly in the midfield. A crucial tackle and turnover by Michael Colivet gave Clongowes possession with only seconds on the clock and they hung on for a superb victory and the perfect end to a long, long season!