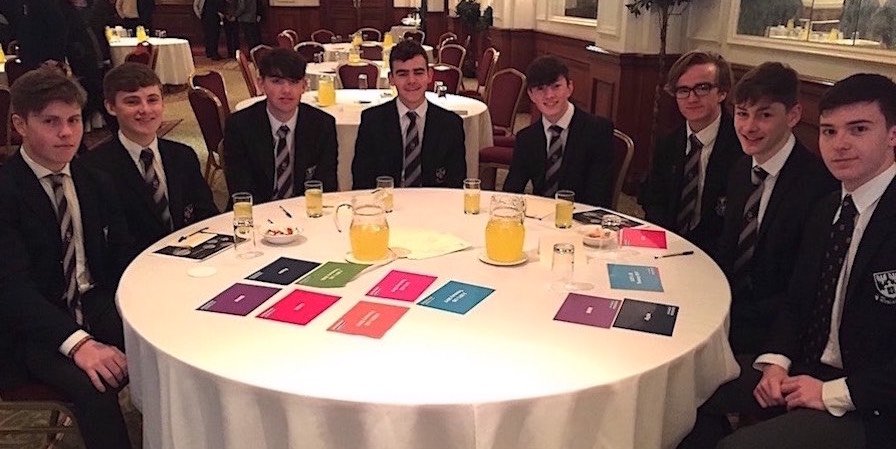 ‘Dictum meum pactum’ (my word is my bond) is the motto of the London Stock Exchange, where bargains are made with no exchange of documents and no written pledges being given. On Wednesday, 29th March, 12 Poetry students departed Clongowes to attend the Kildare County Bond Trader Challenge in the Keadeen Hotel in Newbridge, where they pledged to try their best and hopefully be crowned the best Bond Traders in County Kildare. Luke MacQuillan takes up the story…

When we entered the Kildare Country Bond Trader Challenge we found ourselves in competition with some 30 teams from over 10 schools. Clongowes had entered three teams, each comprising four students, who are currently studying Economics in fifth year and who lined out as follows:

The morning started off with an overview of markets and trading by Bank of Ireland’s Head of Pensions & Investments after which we were told what kind of scenarios we would be faced with during the day. These scenarios would be due to a Break News headline and our job was to react to these headlines and try to invest as efficiently as possible. In each round we would have an option of four Government bonds, two stocks in companies or cash. After a quick practice round we were ready.

The first two of the ten rounds did not go well for any of the Clongowes teams with none making the top five. However fortune smiled on Turbo & Sons as they climbed to first place after the 5th round. This was short lived, and by the seventh round we had fallen to second place leaving no room for any more errors. The recovery was swift and all three teams had everything to play for going into the final round. The final headline was a trick question where you had to look closely at the punctuation of the wording but, thankfully, all Clongowes teams caught on and were able to make up much needed ground on the opposition.

The room then went completely silent, as they were about to announce the winners of the 2017 Bond Trader Challenge County Kildare. All the Clongowes teams were hopeful, that they could be crowned champions but it was Turbo & Sons who won the day at the death. Each of the team members was called forward to be presented with a brand new Kindle Fire in recognition of their efforts.

This was a very enjoyable event and we are very grateful to Bank of Ireland for hosting such an enjoyable morning for all involved. A special thanks also to Mr Colm Maloney (Poetry Prefect) for organising all the teams involved in this event and looking after us all on the day.