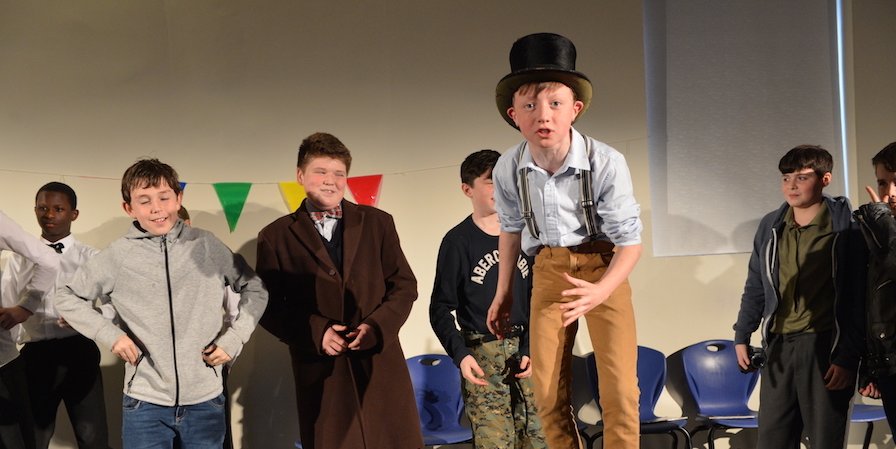 On Thursday and Friday, 30th and 31st March, Third Line and Syntax took to the stage with their dramatic offerings as Clongowes witnessed the long awaited return of its very own Festival of Drama…

Ernie’s incredible imagination is alarming his parents and they go to the doctor in search of a cure. Once there, they discover Ernie’s ‘illucinations’ are more powerful than they realized as everything that Ernie imagines – from secret agents to a boxing granny – has the disconcerting habit of turning into reality. This early (1969) work by acclaimed playwright, Alan Ayckbourn was brought kicking and screaming to the Clongowes stage by the talented and energetic thespians of the Third Line in front of an equally lively audience of their peers. Some of these young men have been studying Renaissance Literature in their history classes and their reactions to the confused and confusing goings-on on stage would have done justice to Shakespeare’s Globe Theatre back in the day.

Appropriately, the drama is a weird and wonderful journey into the imaginings of a young boy with an overactive imagination – a dreamer with a difference. Primus inter pares in the title role was the redoubtable Tommy Murphy from Elements who gave it socks as he both narrated and acted, switching seamlessly from one role to another. While it is invidious to single out individuals from the large ensemble cast of fully two dozen Third Liners, the performances of the ‘wise beyond his years’ Josh Dunne as Ernie’s Dad, Ben Willey and Aaron Mannion as Barkers and the nicely understated Kieran Barrett Gomez as the Library Attendant cum Mountaineer all caught the eye.

Kudos too to the unseen hands of Ms Jane O’Loughlin, and Mr William O’Sullivan, under whose guidance the cast led us on a whistle stop tour de force of the challenging performance space for twenty minutes that seemed to last a life time – and we mean that in a good way.

The Musicians by Patrick Marber

The Clongowes Wood College Orchestra are at the European Festival of Youth in Moscow, just hours away from the most important performance of their lives. There is just one problem: their instruments seem to be missing! Tension mounts as the orchestra arrives at the concert hall, where the only person willing to help them is a Russian cleaner with a broom for a guitar and an interest in all things rock.

The Clongowes premiere of The Musicians brought together two exciting talents: writer (and Academy Award nominee) Patrick Marber and director Tom Carroll, fresh from his recent successes with Macbeth Unlimited and A Whistle in the Dark (both 2016). Another two exciting talents were unveiled onstage in the persons of the illimitable Eddie Boland and his more understated foil, Hugo O’Donnell. From the moment that Eddie bestrode the stage alone with his distinctive rendition of The Who’s ‘Pinball Wizard’ to the denoument where the orchestra, devoid of visible instruments, gave an inspired version of Tchaikovsky’s Fourth Symphony (The Sounds of Silence one might say…) we were transported by a lively and humorous production, especially anyone who has ever played air-trombone.

While the two leads gave much value for money, their efforts would have been set at naught were it not for the fifteen members of the orchestra who both backed them up and threatened to undermine them at every hand’s turn. Such a funny yet complex script required a sure direction from Mr Carroll as well as impeccable comic timing, particularly in the cross-talk sections between the orchestra members. Both the solution to the concert problem and its next-morning coda are inspired instances of pure theatre and were realised to a nicety on the night. Just as with their junior colleagues reviewed above, it was a collective performance but that didn’t stop the very talented Sean Lysaght stealing juicy bits of the show on occasion while his two hander with Zach Martin had the audience rolling in the (metaphorical) aisles.

Any comparisons with the real life Clongowes Orchestra Trip that took place just a week later were almost certainly coincidental, we believe…