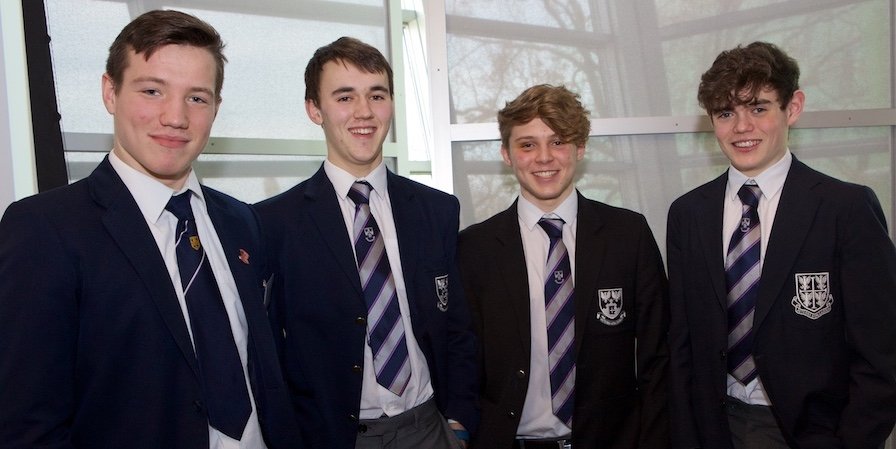 Just before the Mid Term Break (Monday, February 6th) a team of three Poetry students attended a parliamentary style debate in the Kildare County Council Buildings in an attempt to regain the Liam O’Connell Perpetual Trophy previously won by Clongowes in 2012 and retained the following year. Jack Dowling recounts what happened…

Paddy White, Tommy Inglis and I (second to fourth from right above) were accompanied by debating enthusiast and supporter, David O’Connor (left above), as we supported the very topical motion that ‘this house believes that democracy and capitalism are incompatible’. We competed with seven other local schools in the debate, which followed an unusual format with each team’s captain making an introductory statement before the floor was opened to free debate. This style of debate simulated the experience of real parliamentary business and challenged speakers to think on their feet.

The standard of debating was exceptional and the competition provided great experience in public speaking as all of the teams gave very informative, humorous and well-researched presentations. We were last to go but felt confident after all our preparation with Mr Conry. We all spoke well and Paddy White’s comparison of capitalism to lions hunting zebra seemed to engage people both in laughter and in thought.

At around 12.00, we broke for an early (and much needed) lunch. The cafeteria kindly gave us soup and sandwiches but we didn’t have long to enjoy them as we were called back into the main chamber once again, for the rebuttal part of the debate. This part was the most enjoyable, in my opinion. All the participants were picking at everyone else’s arguments as they strove to earn the last few points for their team.

Unfortunately we were beaten by a very deserving and witty Holy Family team, with the speaker of the debate award going to Jack from CBS. Our thanks to Mr. Conry for all his hard work in preparing us so well for a day that we all really enjoyed.