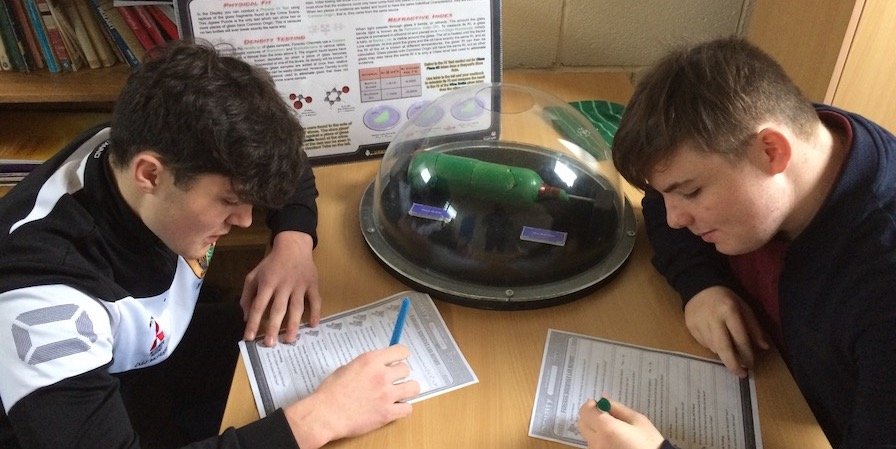 Last Saturday (January 14th), Transition Year was treated to a C.S.I. workshop by a member of the Sydney Police Department. The groups had to solve a murder case presented by the police using the same information that was available to the real police when they had been asked to solve the mystery. Sean Lysaght was our man on the scene…

The work-shop took place in the Music Rehearsal Area where Ms Alison Leck from Education Interactive based in Australia started off by explaining to the group what the main activities of forensic scientists is on a day to day basis as well as explaining a few different cases. She then got us started on the case we would be looking at on the day. It was a case of a girl that had gone missing in Australia and by using different forensic science skills we would have to come to a conclusion and catch whoever killed her.

Alison had set up different stations for us to visit around the room. These ranged from autopsy to toxicology and were designed not only to help us in solving the case but also to give us a better idea of what the main areas of the field of forensic science are. The evidence was all quite disjointed and there seemed to be no apparent links between the different pieces of information; it was like being given a difficult jigsaw puzzle without the big picture to guide you. Some people seemed to figure it out pretty quickly while others found it much harder to think so far outside the box and put all the different DNA and clothing samples together to get one definitive answer.

The stations were very interesting and helpful and definitely greatly improved my knowledge of the subject and gave me a sense of appreciation for all the work forensic scientists have to do on a daily basis. Each section had a clue that would provide us with the answers about our case but also about how the field in question is used by police departments and other groups in order to solve cases. After we saw all of the stations and had pieced together all the clues, she told us about a few famous cases that had happened in Australia and how forensic scientists help to free innocent people but have also – in some cases – made grave mistakes.

Alison told us how the police dealt with the case we had been given and we all gave our theories as to what had happened. She then took out several body bags as well as real forensic science suits used to keep the scientists from contaminating the evidence. After she explained to us how they worked she let us all try them on and gave us an opportunity to take photos in them. The workshop on the whole was a lot of fun and made us all feel as though we were real versions of the characters in shows such as ‘CSI: Miami’.

On behalf of the Syntax group I would like to thank Ms Leck for coming in and giving us this talk as well as Mr McCormack and all of those who helped make it possible.