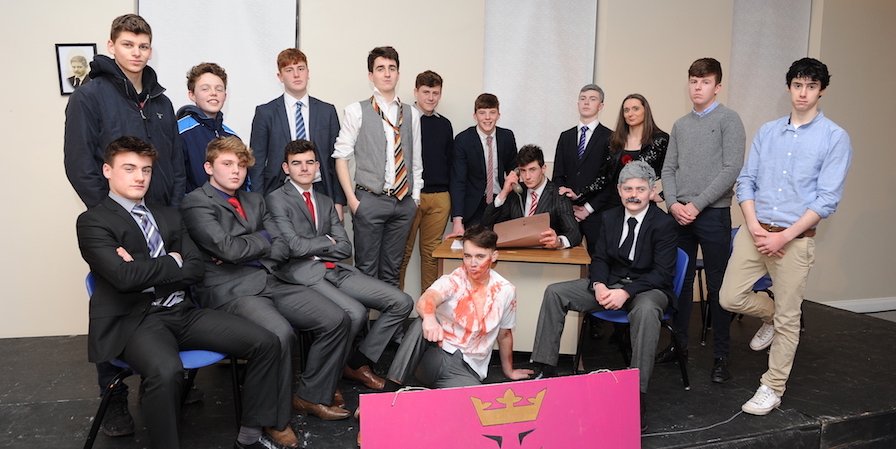 It’s Shakespeare, Jim – but not as we know it…

The ubiquitous Bard of Avon wrote Macbeth around 1609, and since then it has been the most performed of his works – more than any other of the great tragedies. Earlier this year the gentlemen of the Year of Transition 2016 decided to make the play a bit more contemporary and bring the intrigue into the world of banking and high finance along with a selection of the songs of ABBA (after all, it IS Transition Year).

In this interpretation of the work, Daniel Beggs’ Macbeth is no longer a general, but lead broker in Duncan Ltd. Of course, it’s not enough for him and certainly not his Chiquitita played with verve and lots of scariness by the Lady of the Library, Ms Jane O’Loughlin – A Dancing Queen if ever there was one. The interaction between the two leads was a delight and they also cut a rug or two in a memorable dance scene. ‘Gimme, Gimme, Gimme A Man After Midnight’ she might have said as she finally persuades him that The Winner Takes It All.

The show could not be faulted for energy and general joie de vivre as the extensive supporting cast gave it socks in the reimagined Music Performance Area and kept the audience entertained on – not one – but two nights. Kudos to Mr Carroll for attempting such an ambitious interpretation, for asking his cast to ‘Take a Chance on Me’ and for his ‘Super Troupers’ for rowing in behind him with gusto. There are those who will always baulk at anything other than reverential treatment of the classics, but they would have received short shrift on either night.

There is no great surprise as Macbeth meets his Waterloo in the manner envisaged by the author, without time for so much as an SOS.