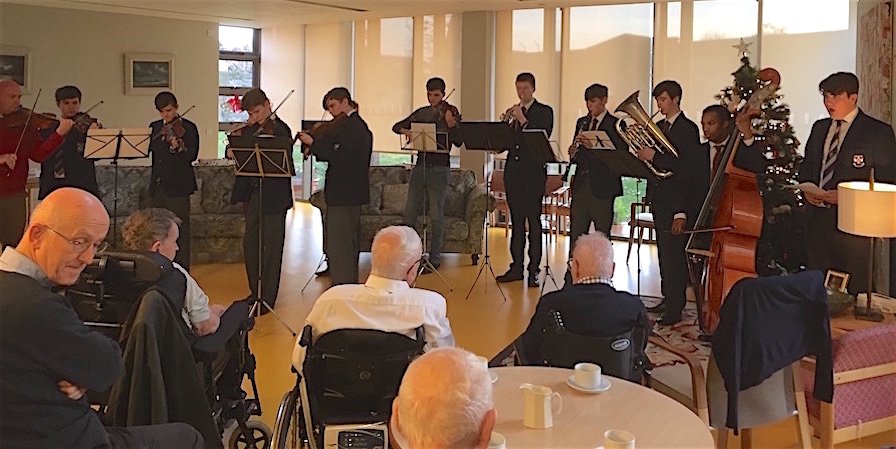 Yesterday (Sunday, 18th December) seven Rhetoric orchestral musicians and three choristers from Syntax, accompanied by Mr Philip and Ms Theresa Thomas, their son Mark (OC’15) and of course the indispensable Fr Michael Sheil, undertook their annual journey to Cherryfield, the Jesuit convalescence home in Ranelagh to play the most patient of audiences a range of festive Christmas carols and songs.

The assemblage, including some familiar faces such as Frs Paddy Crowe and Dermot Murray, saw the boys rise to the occasion as they played a blinder with a range of Christmas music styles from the sacred ‘Silent Night,’ ‘Adeste Fideles’ and ‘The First Noel to the secular ‘Rockin’ Around the Christmas Tree’, ‘Rudolph the Red Nosed Reindeer’ and ‘Jingle Bells’ (to name but a few) and finishing up with Jesse Onyejekwe’s ‘Christmas Rap’!

The audience was extremely appreciative and confidently sang along under the guidance of Syntax student and tenor, Hugo O’Donnell. The atmosphere was great and the residents seemed to thoroughly enjoy the performance. Afterwards, we spent some time chatting to the residents over a few mince pies.

A great day was had by all and it must be remembered that were it not for the hard work and dedication of the staff in Cherryfield and the continued efforts of Fr Sheil, Mr and Mrs Thomas and Mr Mason this wonderful tradition would have become a mere memory many years ago.

A big thank you must go to the staff of Cherryfield for the continued work and generosity towards us as visitors from Clongowes. A special word of thanks also to Fr. Sheil for inviting and transporting us every year to share our talents with such an appreciative Community of retired Jesuits and their amazing carers.

Hugo O’Donnell (who lead the singing of the carols)