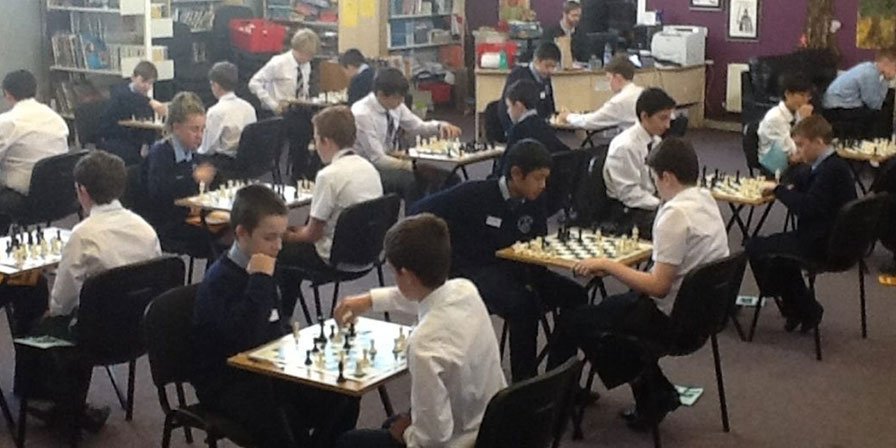 While Woody Allen may have quipped that he failed to make the chess team because of his height, the same may not be said of the intellectual giants from Elements and Rudiments who took on the might of St. Kevin’s College, Crumlin last Thursday (20th October) and acquitted themselves with no little distinction…

This was the fourth battle between these schools and, even though the Elements lads were new to the fray, there was an immediate camaraderie between the boys. Two 1st Year and two 2nd Year teams from each school, comprising twenty-one boys and three girls (from St. Kevin’s!) played out a five-round match in the Crumlin school’s library, watched over on one side by a scary-looking Viking figure and, on the other, by the most famous family on the planet, the Simpsons.

While the Clongowes players edged more of the matches, the glory was evenly divided by the stars on both sides. From Clongowes, Elements students, Nikolai Rager, Harry McDermott and Alex Taaffe scored five out of five while Kevin’s boys, Shane Sheridan and Ron Pingol matched their performance. We will have to wait for Episode 5 to pitch these lads against each other and watch the sparks fly.

Honourable mention must go to Elements’ Charles Wirsuly, who scored four out of five and to Matthew Cassidy on the same score, who was by far the best Rudiments’ player on the day.