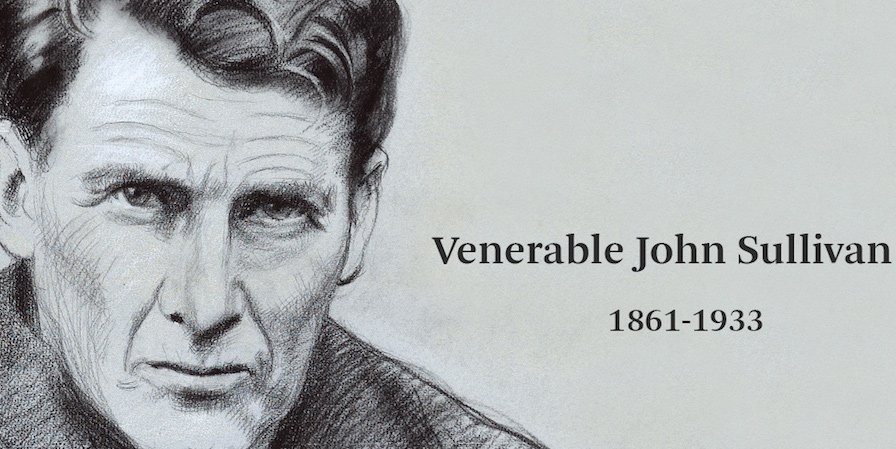 Glad tidings of great joy indeed as it has been announced that Pope Francis has approved the decree that authenticated a miracle attributed to Fr Sullivan SJ, which will lead to his Beatification. Pope Francis’ approval was given at an audience with Cardinal Angelo Amato, the prefect of the Congregation for the Causes of Saints. The miracle happened when, in 1954, Delia Farnham from Belvedere Place, Dublin, was praying to Fr John Sullivan and the cancerous tumour on her neck miraculously disappeared.

In November 2014 Pope Francis approved the recommendation of the Congregation for the Causes of Saints that the Servant of God, Father John Sullivan, S.J., be declared Venerable. This was a cause for much rejoicing here at Clongowes among his fellow-Jesuits, the teaching staff and students of the College, where Fr Sullivan spent most of his priestly life. One miracle was required for the Beatification of Venerable John and – now that this has been authenticated – another is required for his ultimate Canonisation.

Many miracles have been attributed to the saintly Fr Sullivan, who will always be synonymous with the People’s Church in Clongowes, where he ministered for many years and which now contains his baptismal font. John Sullivan was born in Dublin on the 8th May 1861. He was the child of a mixed marriage, was raised a Protestant and was received into the Catholic Church in 1896. He entered the Society of Jesus in 1900, was ordained priest in 1907 and appointed to the academic staff at Clongowes, where he was to spend most of the rest of his life.

Fr John lived an austere and frugal life in the school and was renowned for his asceticism throughout the surrounding countryside. He was always available to the needy, the poor and the infirm of the locality. People came from far and wide to seek his blessing and his prayers. Fr John was a familiar sight on the roads around Clongowes as he cycled his old bicycle or walked at a brisk, trotting pace usually on his way to visit someone who was sick.

To this day his memory is held in great reverence in the locality and many people visit the People’s Church to pray to him. He died on the 19th February 1933 and was buried in the Community Cemetery at Clongowes. In 1960 he was declared a Servant of God and his mortal remains were transferred from Clongowes to St Francis Xavier’s Church, Gardiner Street, Dublin. Since then the cause for his Canonisation has been making steady progress in Rome and we pray that this will continue to a successful conclusion.

Fr Conor Harper SJ, Vice Postulator for the cause of Fr John Sullivan, says the long awaited news will delight many of the friends of John Sullivan throughout the world but especially here in Ireland. ‘What is remarkable about Fr John Sullivan,’ he adds, ‘is the manner in which he is remembered and revered in the two Christian traditions that were so dear to him, the Roman Catholic and the Protestant. Our Church of Ireland friends join us in celebration.’

Also commenting on the news, Church of Ireland Archbishop Michael Jackson said, ‘The holiness of the life of John Sullivan SJ has touched and inspired countless people in Ireland and internationally. We in the Church of Ireland give thanks for the public recognition of holiness, humility and service of humanity on the part of John Sullivan. We rejoice in the fact that, as well as living a life that honoured God and the Jesuit Order, he spent half of his life as a member of the Church of Ireland. In this sense the recognition of his holiness has a strong ecumenical feel to it, as he never rejected the influence of the Anglican tradition on his spiritual flourishing. Members of Portora Royal School, where John Sullivan was educated, will also rejoice on this day.’

Monthly Mass in thanksgiving for the life of Blessed Elect, Venerable Fr John Sullivan SJ at 1.00pm on Saturday 17 September at the Church of Saint Francis Xavier, Gardiner Street, Dublin 1. Special homily and blessing with crucifix of Fr John available after Mass.

We are indebted to Jesuit Communications Ireland for the information contained here and also for the image accompanying this piece. Much of the historical material above is taken from A Short History of Clongowes Wood College, which was privately published in 2011 by Mr Brendan Cullen, a local historian and formerly teacher of history in Clongowes (1971-2007). It is reproduced here by kind permission of the author.