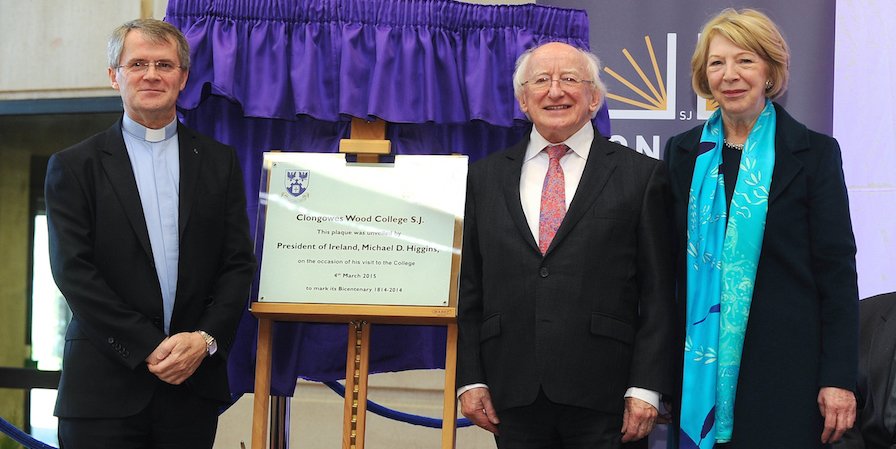 On March 4th 2015, 201 years to the day after Fr Peter Kenny sj signed the Deed of Purchase for Clongowes Wood, Ireland’s First Citizen, Uachtarán na hÉireann, President Michael D Higgins visited the school. In a visit that pointed up how far both the country and the school have travelled in two hundred years he spent some time with the students, the Jesuit Community and the staff before addressing the school community and unveiling a commemorative plaque…

It was with a great sense of excitement that we awaited the arrival of President Michael D. Higgins and his wife, Sabina, on Wednesday 4th March 2015. A Guard of Honour from the School Council greeted the Presidential party and the Rector Fr. Michael Sheil SJ and Headmaster, Fr. Leonard Moloney SJ welcomed President and Mrs. Higgins at the doors of the Castle. On entering the building, President and Mrs. Higgins were greeted by Mr Emmet Condron and Mr John Bruton, President of the Clongowes Union and invited to sign the Bicentenary Visitor’s Book as the Choir, conducted by Ms Liz Keighary sang ‘Dulaman’ in the balcony above with Eoghan McLoughlin as soloist.

Having been introduced to the Jesuit Community and selected members of the college staff and student body our guests made their way through the school where they encountered several tableaux with students posing as James McLorinan, the first student, James Joyce playing gravel with his friends, John Redmond re-enacting his speech on Union Day 1914 along with soldiers depicting Old Clongownians who fought in WW1 and a group representing the 1970s, one of whom recited a poem written by Michael D. Higgins in that decade. Students also explained our Social Outreach programme, the Lourdes Pilgrimage, the African Immersion Experience and the Duck Push.

President and Mrs. Higgins arrived to a packed Sports Hall to rapturous applause after which the Presidential Salute, arranged by Ms Theresa Thomas was played by the College Orchestra conducted by her husband Philip, while their son Mark followed with a violin solo, accompanied by Mr Noel Mason. Other entertainments included the recitation of a Máirtín Ó Direáin poem by Cathal Duffy, a rendition of ‘Adiemus’ by the Orchestra, and two jigs courtesy of the Traditional Music Group under the baton of Ms Catherine Heslin.

Fr Sheil had said a short prayer at the start of proceedings and President Higgins made an inspiring speech in which he remarked that ‘Clongowes is among a special group of schools that since their founding by the Jesuits have made a special contribution to Irish life and history’. He cited our impressive roll call of past pupils, many of whom have gone on to leave indelible marks on Irish society in the worlds of literature, culture, theatre, business, sport, media and public life having benefitted from the holistic education they received here and from an environment which encourages every boy to realise his possibilities and reach his full potential. Referring to our Mission Statement, the President singled out the concept of being “open to growth” as a wonderful measure for a successful education. (The full text of the President’s address is available here)

In his reply, Fr. Moloney thanked the President, saying what a signal honour it was to have him visit the school in its Bicentenary Year. He then joined the President and Mrs Higgins in unveiling a plaque to commemorate the visit after which the School Captain, Jack Gillespie presented an early edition of The Day’s Burden by Thomas Kettle to the President and Rowan Osborne and Tim Burke presented a bouquet of flowers and a Bicentenary Pen to Mrs. Higgins. As the President departed the Sports Hall he was greeted by another guard of honour, this time in the form of our very successful Senior Soccer Team (who are just one win away from league glory).

The President retired to the castle, where he was entertained to lunch by the Rector before departing somewhat behind schedule after a very successful, relaxed visit that left a warm feeling behind and a sense that we had all been involved in something very special.