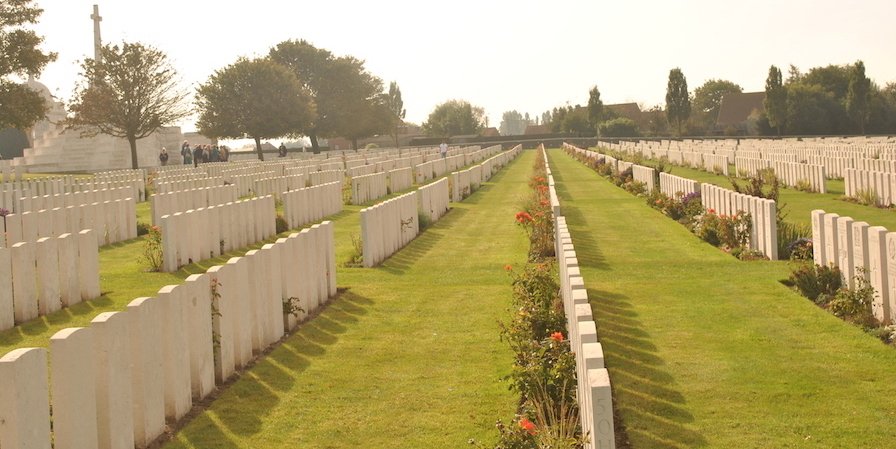 They shall grow not old, as we that are left grow old…

At the end of September, a group from the Clongowes Wood College community with some alumni and friends visited Flanders and the Somme to commemorate the contribution of Old Clongownians and Irish Jesuits to World War One. We flew to Brussels before cockcrow on Thursday, 25 September, returning four days later at the end of a singularly rewarding bus trip around the battlefields of the Western Front. Dr Ida Milne, a historian who is researching some aspects of the history of the college accompanied the group and kindly provided the following account…

The phenomenal organisational force behind the trip was college archivist Ms Margaret Doyle, who has a keen interest in military history and has been documenting the exceptional contribution of Old Clongownians to World War One. As well as being a font of war history, Margaret displayed an aptitude for military strategy in making sure we were all where we had to be, when we had to be there, through orders couched in her customary charm.

She told us that over 600 OCs enlisted, and 95 were killed. Their names are inscribed on a brass plaque outside the church door. Past pupil John Vincent Holland won a Victoria Cross – the highest decoration of the British forces – fighting with the 16th Division of the Leinster Regiment at Guillemont in the Somme in September 1916 and that 41 others won military crosses. In all, OCs have been awarded 4 VCs – in the Crimean War, the Boer War and both world wars.

The trip turned into parallel individual and collective commemorations of fallen soldiers in WWI, as we found graves and markers for members of family, the Society of Jesus and the Clongowes school community. There were some surprises: one OC found a relative he had not known to be in the war buried at Tyne Cot in Flanders, discovering that he had been an airman.

It was a comradely journey, as we shared our various areas of knowledge about the war and the contribution that Old Clongownians made, whether as politicians like John Redmond exhorting Irish nationalists to join up, or whether soldiering like Fr Willie Doyle, Tom Kettle and John’s brother Willie Redmond.

The experience of remembering was enhanced by the erudition of our guides, Colonel Dick Heaslip and Captain Donal Buckley, Fr Fergus O’Donoghue and Mr Damien Burke of the Jesuit Archive kept us well briefed about the 32 Irish Jesuit chaplains’ work in the war, while the medical doctors described the effects blasts would have had on the human body, and spoke of how war traumas helped to develop medical knowledge in several different fields.

Early in the trip, the Headmaster, Fr Leonard Moloney SJ, spoke of the appropriateness of the last two sentences of the Lord’s Prayer to remembrance of the war: “Lead us not into temptation, but deliver us from evil.” His point gave the reciting of the Lord’s Prayer an enhanced significance each time the group laid wreaths to the Clongowes and Jesuit community at several locations in these killing fields of Flanders and the Somme, fields where human bones found by local tillage farmers still bear witness to the evil.

Laying wreaths to Jesuit Chaplains like Father Willie Doyle and Fr Michael Bergin was a moving experience for the group, and particularly for the Jesuits. As one noted at the grave of Bergin, who served with the Anzacs: “We are probably the first group of Irish Jesuits to visit here.”

In Loker, we visited the grave of OC and Irish Parliamentary Party MP, Major Willie Redmond, who fell fighting with the 16th Division in the Battle of Messines in 1917. Dr Harman Murtagh gave a moving account of his life and death around his solitary grave in a cornfield in Loker, and the school community laid a wreath and once again prayed together. Stretcher-bearer Private John Meeke of the 36th Ulsters risked his own life crossing Suicide Road to pick up Redmond when he fell. Meeke himself was injured in the process, but insisted on continuing, as it was Willie Redmond, who was held in high regard by his troops.

At Thiepval Memorial to the Missing of the Somme, Mr Declan O’Keeffe paid eloquent tribute to another OC, writer, barrister and Home Rule politician Tom Kettle who died fighting with the Dublin Fusiliers at the Battle of the Somme on 9 July 1916. Mr O’Keeffe described Kettle as one of the leaders of a generation who gave new intellectual life to Irish politics. He also made interesting connections between some of those we were remembering: ‘In a nice coincidence, Fr Doyle had served in Clongowes while Kettle was a pupil and founded The Clongownian while there in 1895. While the Redmonds predated both men, Kettle had hitched his wagon to John’s rising star in 1906, while Willie would share Kettle’s fate in June 1917, while leading his men on the Messines Ridge.’ 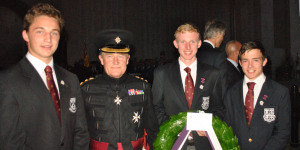 The school captain Jack Gillespie (above centre with Colonel Tim Purdon of the Irish Guards), vice captain Rowan Osborne (right) and secretary Tim Burke (left) looked very smart as they laid a wreath at the Menin gate remembrance ceremony, a colourful occasion, as Clongowes were joined in the Last Post ceremony by the Irish Guards band, in Ypres for a memorial tattoo. Other wreaths were laid by the Jesuits, the staff and the past pupils. At the tour dinner in Ypres afterwards, Mr Peter Gray OC observed  that the three pupils who presented the wreath would have been much of an age with the Allied and German soldiers, and that the soldiers were probably as innocent as them.

The modern tranquility of the graveyards preserved so carefully by the War Graves Commission is aided by the simple white Portland stone headstones, a stark contrast to the conditions in which the soldiers met their deaths. Whatever cause they gave their lives for, there is a kind of peace in these cemetery cities where they lie. Tom Kettle suggested as much in a letter he wrote shortly before his death: “I hope to come back. If not, I believe that to sleep here in the France that I have loved is no harsh fate, and that so passing out into silence, I shall help towards the Irish settlement. Give my love to my colleagues – the Irish people have no need of it.”

At the going down of the sun and in the morning,

Irish Jesuit Chaplains in the First World War, edited by Damien Burke, was published last month and is available from Messenger Publications: