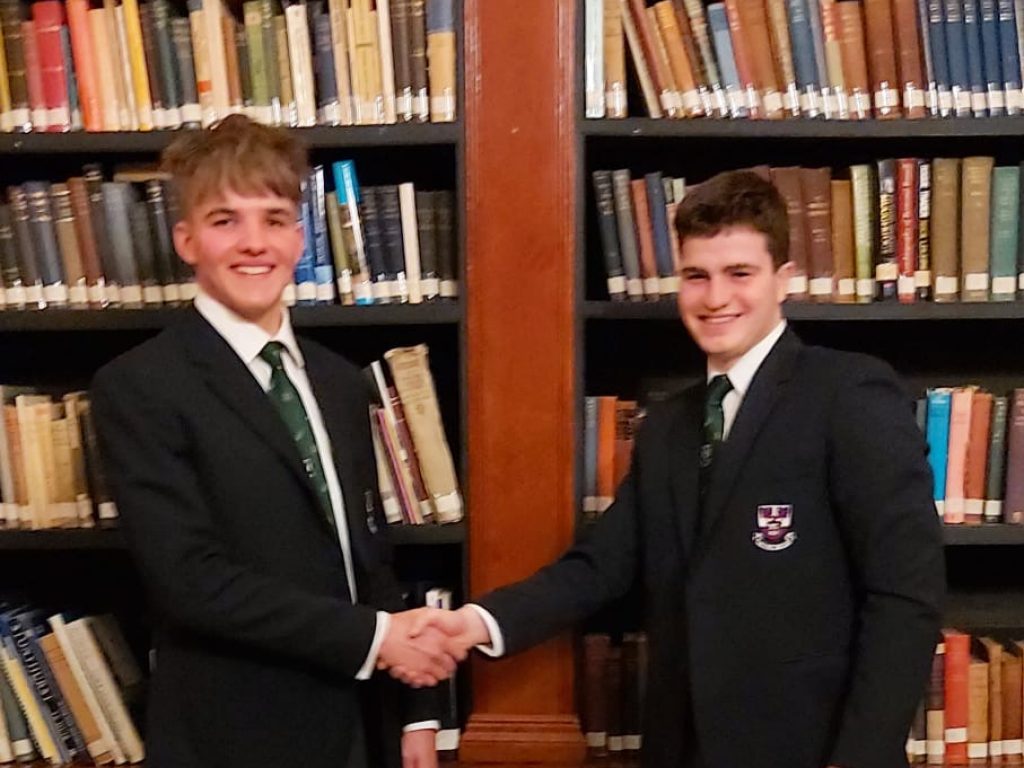 Last week saw Toby Griffin deliver the final Academy of the school year.  It was only fitting that the Academy 2021/2022 was brought to a close by its standing President.

Toby began by thanking the students and staff members with special mention to Fr Michael Sheil SJ and Fr Barney McGukian SJ from the Jesuit Community for attending the Academy presentations. He also thanked Headmaster Mr Lumb, Patron of the Academy and Co-Patron Mrs Lumb for their support of the Academy. A thank you also went to Mr Connolly from our Catering Team for providing the very welcome and high-quality post-meeting refreshments.

The Academy was set up by Fr Hilary Lawton, Prefect of Studies, back in the 1950s as a modern-day version of Plato’s Academy from Ancient Greece. It follows a strictly academic model where each member must present a scholarly paper of some 40 minutes to his peers, who then pose questions about his research. Each paper is a culmination of the members’ exhaustive research into and analysis of their chosen topic. The Academy gives its members a chance to become experienced in the research process, public speaking, and fielding questions from their audience.

Fr Michael Sheil SJ is the Academy’s Moderator and is a former member of the Academy, having delivered a paper on Norman Castles during his Poetry year.

Toby’s Academy was entitled: “ The Military/Political Genius of Napoleon Bonaparte.” Toby has a particular interest in the enigmatic Emperor and has long been fascinated with the life and times of Napoleon. Toby gave a detailed account of circumstances and events that contributed to Napoleon’s rise to power over the years starting with his early childhood and education.

Toby shared a series of intriguing facts about Napoleon, making sure to dispel the myth that he was a diminutive figure; sharing that he was in fact above average height for a Frenchman of the time. Some other little known facts about the leader included that he was 2 hours late for his wedding, had a fear of cats, discovered the Rosetta Stone, wrote a romance novel and more!

Born in Corsica, the 2nd child in a family of 13, Napoleon is said to have craved love and attention from his mother while being a loner at school. He graduated almost bottom of his class from a Military College in Paris (42nd out of 58th) – hardly indicative of his future military career.  At just aged 16, Napoleon joined the French military and so began his much documented rise to power.

Toby brought the audience along the path to ascendance of Bonaparte’s military career, helped in no small part by his association with the revolutionaries that he met thanks to his membership of the Jacobin Debate Club.

By 1804 Napoleon had declared himself Emperor of the French, much to the chagrin of other European leaders who viewed his accession to power as setting a dangerous precedent.

Toby brought the audience through the career of this newly crowned Emperor, up to the point of his  defeat and subsequent exile to St Helena where he would spend his final days.

In closing, Toby acknowledged the political and military genius that was Napoleon Bonaparte, a man who deserves respect for his successes and unfailing ambition.

Toby’s paper is certainly detailed and comprehensive. Click the following link to read his full paper:  The Military Political Genius Of Napoleon Bonaparte

Well done Toby on an excellently researched and superbly delivered Academy and thank you for your service to the Academy.