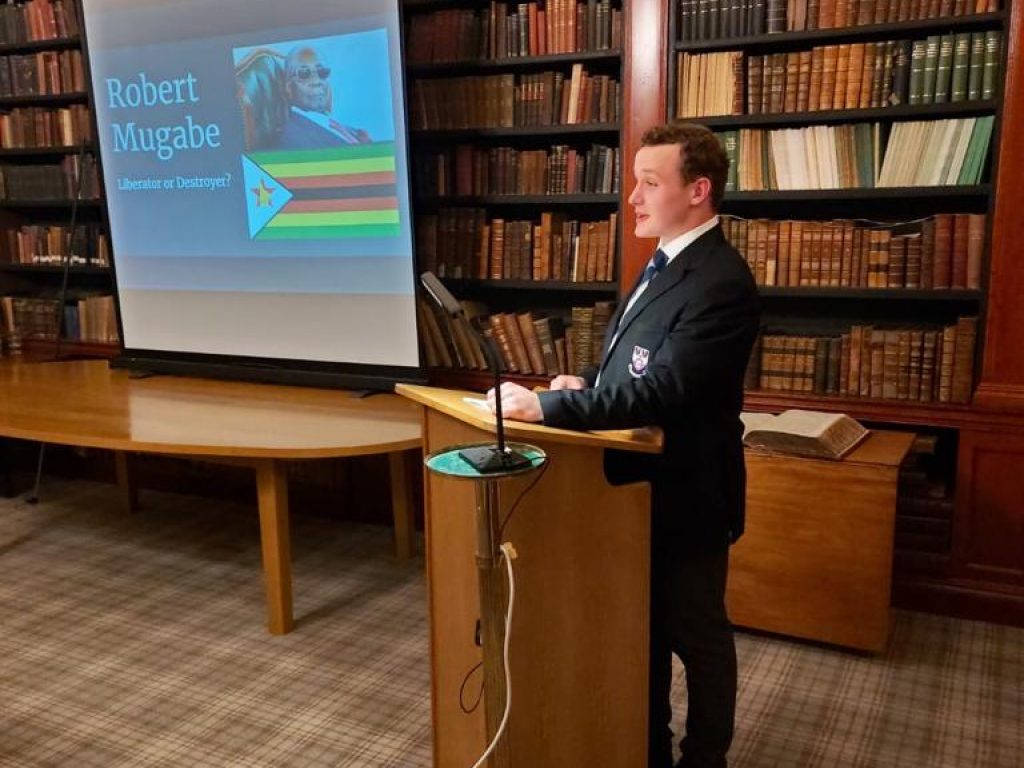 On Thursday 7th of April, James Wyse took to the Academy stage with a fascinating and detailed presentation entitled “Robert Mugabe: Liberator or Destroyer?”.

James provided an in-depth profile on the Zimbabwean revolutionary and politician, Robert Mugabe, in terms, not only, of the historical record, but also the toll ‘the colonialist mentality’ took on the country over the decades.

To provide some background on The Clongowes Academy; it was set up by Fr Hilary Lawton, Prefect of Studies, back in the 1950s as a modern-day version of Plato’s Academy from Ancient Greece.  It follows a strictly academic model where each member must present a scholarly paper of some 40 minutes to his peers, who then pose questions about his research. Each paper is a culmination of the members’ exhaustive research into and analysis of their chosen topic. The Academy gives its members a chance to become experienced in the research process, public speaking and fielding questions from their audience.

Fr Michael Sheil SJ is the Academy’s Moderator and is a former member of the Academy, having delivered a paper on Norman Castles during his Poetry year. Each session is followed by questions, refreshments, and the opportunity for lively discussion on the paper just delivered.

James brought his audience through the troubled history of Zimbabwe, once known as ‘the jewel of Africa’ from colonial times, to Mugabe’s early years and pre-political career in the context of the wider political and social unrest in the region, the Lancaster House Agreement and ultimately Mugabe’s election as Prime Minister.

James follows the early years of Mugabe’s rule and the ensuing prosperity for the newly independent country of Zimbabwe.  James has a personal link with this time in the county’s development as his mother was working in the county in the 1990s.  This time of prosperity and societal development was marred by the Gukurahundi massacres – a campaign of terror waged by Mugabe on the minority Ndebele people who did not support his ZANU party.

The early 2000’s saw another radical change in Zimbabwe with farmland taken back from white farmers at the behest of the government.  This land reform programme ultimately led to an economic disaster for the county and contributed in no small part to the downfall of Mugabe and left Zimbabwe and its people in poverty and hunger.

A coup in 2017 saw Mugabe overthrown and he promptly left the country and died in Singapore in 2019.

James’ excellent paper is a detailed historical account of Zimbabwe and its one time freedom fighter Prime Minister who ultimately became one of the world’s most notorious tyrants.