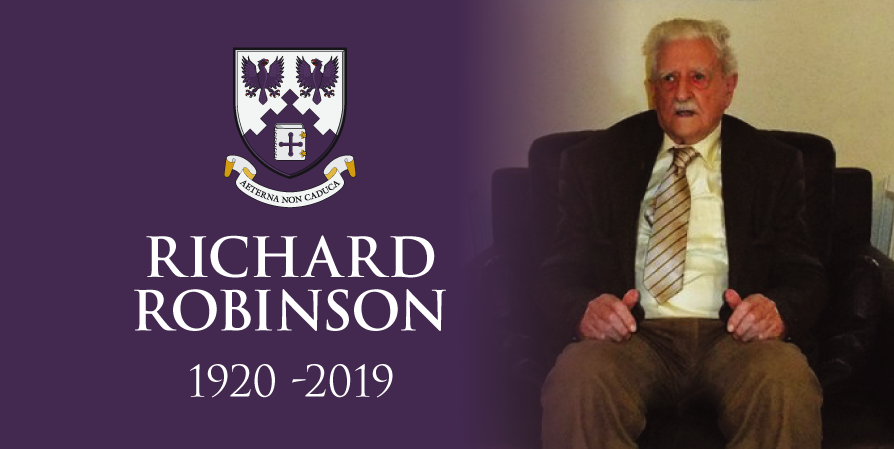 The Foundation and College are deeply grateful to the late Richard (Dick), Robinson who in his will, generously bequeathed a substantial legacy to the Foundation.  Born in 1920, Dick lived into his 100th year.

Richard Robinson of Newberry Hall, Carbury, County Kildare, attended Clongowes between 1932 and 1938, where his uncle Fr. Mathias Bodkin S.J. was the Prefect of Studies.  Richard’s maternal grandfather was Judge Mathias Bodkin K.C., author, journalist and nationalist M.P. for North Roscommon (1892 -95), who was educated at Tullabeg before its amalgamation with Clongowes.  Richard’s father also attended Clongowes as did his Uncle Richard, who died in his final year on the morning of May 20th, 1900, after a brief illness.  His brother Norman, who left Clongowes in 1935, was an officer pilot in the RAF who was killed in action in 1943, after many years of service, at the age of 26.

In Richard’s early days at the School, Blessed John Sullivan S.J. would have been his Spiritual Father and he was a contemporary, in First Rhetoric, of Fr. Ray Lawler S.J., whom many will fondly remember from their own days in Clongowes.  Dick was a contemporary of Charles Mitchell who went onto to become Ireland’s first newsreader and with whom Dick was to share a strong interest in the Dublin theatre scene in later years.  In Richard’s final years he was a member of the Higher Line Debating Society.

On leaving Clongowes Richard trained as an aeronautical engineer in Handley Pages in London whilst studying aeronautical engineering.  With the war looming Dick returned to Ireland and joined the Irish Air Corps, in Baldonnell where he served from 1939 to 1945 while simultaneously completing his studies.  After the war Dick worked in Aer Lingus before returning to Newberry Demesne where he developed a deep knowledge in sheep husbandry.

In 1950, Dick was invited to write for the Farmers’ Journal and was influential in getting the great poet, Patrick Kavanagh, to write for that paper.  On the death of his father John in 1966, Richard inherited Newberry Hall.  Newberry was central to his world, and those who lived and worked there returned again and again to visit Dick who was always so generous in sharing his time and knowledge.

Richard died on 24th October 2019 and was predeceased by his wife Margaret who was sadly killed in a car accident in 1971 a few years after they were married. His sister, Nora, died in 1984.

Richard’s legacy helped fund the refurbishment of the Infirmary and support the Alberto Hurtado Endowment Fund thereby ensuring that his benevolence will positively impact on the lives of future generations of Clongowes’ students.  In becoming a key member of the Fr. Peter Kenney S.J. Legacy Society Richard follows in the steps of Mrs. Olivia Taaffe of Smarmore Castle, County Louth who was the first person recorded to have left a legacy in favour of Clongowes in their will (The Clongownian 1919).  The Clongowes Foundation and the College are deeply indebted to Richard’s great generosity.