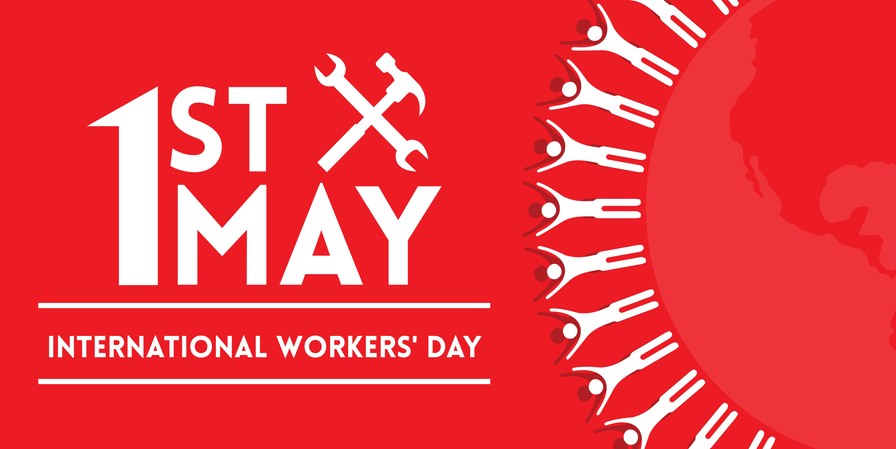 Q.2 Do you know the origin of the May Day celebrations around the world on this first day of the fifth month in the Gregorian calendar?

In Europe, the first day of May is historically associated with rural pagan festivals – but the modern association with the labour movement dates to the late 1880s in the United States – in commemoration of the Haymarket Square Riot in Chicago in 1886. What had begun the previous day as a peaceful rally in support of workers striking for an eight-hour day ended in carnage – when police killed one worker and injured several others. The following day, 4th May – an unknown person threw a dynamite bomb at the police as they acted to disperse a gathering of protesters at the police action – and the bomb blast and ensuing gunfire resulted in the deaths of seven police officers and at least four civilians – with dozens of others wounded. Five years later – uneasy with the socialist origins of the protest – President Grover Cleveland signed legislation to make Labour Day an official holiday in honour of workers.

In the post-revolution Soviet Union, Leaders embraced the new holiday – believing that it would encourage workers in Europe and the US to unite against capitalism. There were high-profile parades in Communist countries – often allowing for a flexing of muscles in showing off the deterrent power of military might during the Cold War – none more so than in Red Square in Moscow.

In Germany, Labour Day became an official holiday in 1933 after the rise of the Nazi Party – but, ironically, free unions were abolished the next day – virtually destroying the German labour movement.

In 1939, Eugenio Pacelli – Papal Nuncio to Germany in the 1920s and Vatican Secretary of State in the 1930s – was elected Pope and took the name Pius XII. He was to experience the dual horror of Nazi atrocities during WWII- and the rise of Communism in its aftermath.

In 1955 he decided to mark the holiday in a special way to honour workers and vindicate their dignity and rights by proclaiming 1st May as the Feast of St Joseph the Worker.

In the Scripture passages at to-day’s Mass we read of the Creator at work after the fifth day: Then God said: “And now we will make human beings – they will be like us – and He was very pleased.” [Gen.1:26,31] What greater honour could we have received than the Father’s satisfaction in what He had done – and His call to us to continue His creative work!

In the second reading St Paul tells the Colossians that everything should be done in the Name of Jesus and as an act of thanksgiving to the gift-bearing Father Creator of the universe.

But what a difference in tone in the Gospel! Jesus returns to His home town with a growing reputation as a good Teacher and a wonder-worker ……… He taught the people in their synagogue in such a way that they were astonished and said: “Where did the man get this wisdom and these miraculous powers? Isn’t he the carpenter’s son? Social class-distinction was already alive-and-well in Nazareth in Jesus’ time – even among those who would readily refer to the Book of Genesis as a reference. His townspeople cut Him down to size – for lack of social standing ………. How could it be that the son of a working-class village carpenter can talk to us like that!

As I write, we are experiencing a great lifting of spirits with this week’s Government announcements of a calendar for the gradual lifting of covid restrictions. People are beginning to talk about looking forward to getting back to normal life at last.

Last evening on the Late Late Show Ryan Tubridy did a wonderful job of harnessing the energy of a group of the older generation [all but one octogenarians!] who shared their experience of the long post-Christmas lockdown. As they told of how they lived through some of the hardships – confinement, loneliness, uncertainty, zoom-aversion – they spoke of how much they appreciated the unexpected kindness of neighbours and strangers who showed how they cared for those unable – or afraid – to move out. Young people offered to do grocery runs – postmen/women, when delivering letters, occasionally knocked on the door to know how the owner was getting on ……….. one even put a bar of chocolate on top of the postal delivery!

Tubridy has a great gift of drawing people out of their shell. He doesn’t preside – but engages his guests at their level. Having shared what they had gone through and what they had missed – they turned the discussion to getting back to normal life. Everyone in the group was adamant that each of us must learn from the pandemic experience by reflecting and asking oneself: How did I cope? – what did I learn about myself?  – what did I observe in others? – what did I find positive in it all? They might have been surprised if I suggested to them that they were engaging in the first step of a very Ignatian exercise – reflection leading to discernment!

We must remember that St Ignatius was at the very lowest point of his life. – when he lay convalescing – as a wounded and failed soldier in his castle at Loyola – thanks to his heroics at the siege of Pamplona [exactly 500 years ago this month!] Basically uneducated – apart from some military prowess – he began to review his life and examine his values – and he started to dream of something different from his previous hopes and plans for a career at court. With his recovery far from complete – but determined to follow his dream he set out for the Holy Land – alone and on foot! Having stopped briefly at the Benedictine Monastery of Montserrat – where he confessed his sins and found himself at peace with God – he continued eastwards – and stopped at a little village called Manresa, where he intended to rest “for a few days”. It turned out to be all of eleven months! He reflected on events in his past life and how they affected him. This led him to write everything down in a notebook to examine and weigh-up choices – which led to prayer – which led to decision – which led to discernment – and to action – then to further reflection – and on again to more discernment.

Tubridy’s octogenarian friends were drawn to realize the contribution of the many people – who, unknown to them and in the background – kept-the-world-turning during the pandemic. We have to be grateful – not just to the front-line workers and the medical teams and the researchers [let us thank God for the success of their work] – but let us pay tribute to those who, unheralded and unsung, looked after the essential services – collected our rubbish – ensured  electricity and water supplies – kept emergency services going and transport moving – supplied the markets – and so on.

Turning to look more locally – at the Holiday Camp in Kildare ………… I wonder how many Students/Staff/Parents know that every morning since we reopened last August – while everyone is still asleep, a member of our Support Staff arrives, as dawn is breaking, to sanitize the corridors and classrooms and chapel and meeting rooms and offices and toilets and every nook-and-cranny in preparation for the day’s activities? Perhaps one of the most important fruits of our reflection on the pandemic should be to appreciate that hidden contribution by our unseen Staff working for our welfare – and to make sure that we thank those looking after us, unknown to ourselves!

One explanation is that – in the first beginnings of air travel – a French pilot in difficulty as he approached the coast of England radioed: Venez m’aider! – which was picked up at Croydon Airport as simply m’aider and thus was born Mayday! In 1927 – at the Aviation Conference in Washington – it became the official international air/sea distress call – repeated three times: Mayday! Mayday! Mayday!

So now you have it!