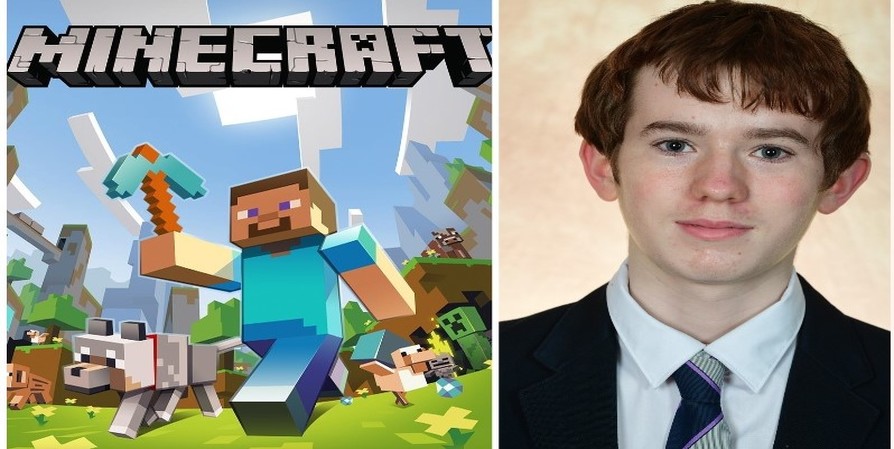 Congratulations to Matthew O’Donohoe (Rudiments) who has won the Digital Myth competition run by Classics Now. The brief to students was to “reimagine ancient myths of the Greek and Roman world using digital technology.” Students were encouraged to recreate and adapt one of the myths which they have studied as part of their Junior Cycle Classics course, using a digital platform such as Minecraft, Scratch or Fortnite.

Matthew chose to do his competition entry on the tragic myth of Orpheus’ trip to the underworld following the death of his wife, Eurydice. In the story, Eurydice is bitten by a snake on her wedding day and perishes. Orpheus, her bereft husband, decides to venture into the underworld and to strike a deal with Hades (the king of the dead) to win back his wife. Matthew’s video, which was produced in Minecraft, is shot from the first-person perspective of Orpheus as he makes this journey.

The opening scenes of the video show Orpheus being ferried across the river Styx, the boundary to the underworld, by the dread ferryman, Charon. The camera then pans past the Elysian fields and the depths of Tartarus where Matthew recreated the punishment of Sisyphus, perpetually rolling his boulder up a precipice. As the video progresses, the camera comes face to face with Hades and his three-headed hound, Cerberus. Matthew’s voice-over explains the pact which was struck: Orpheus could have his wife back, provided he could lead her out of the underworld without once looking back. Like Lot’s wife in the book of Genesis, the temptation to glance behind him proves too powerful for Orpheus, and just as he is recrossing the river Styx back to the land of the living, he loses Eurydice for a second time.

The competition was organised as a collaboration between TCD, UCD, NUIM and the Classical Association of Ireland Teachers. The judge was Professor Martin Brady, the Head of the School of Classics in UCD. Professor Brady commented that Matthew’s video “contained not only an extensive and detailed modelling of the underworld but also, in its first-person perspective, an opportunity to make a really dramatic reveal of the key moment in the story when Orpheus turned around.”

As a renowned musician and story-teller himself, Orpheus would no doubt have approved of the twenty-first-century equivalents of his craft. While Minecraft may be a far cry from Orpheus’ tortoise-shell lyre, Matthew’s retelling of the myth, like Virgil before him, can still sing night and day of poor Eurydice: “te veniente die, te decedente die canebat”