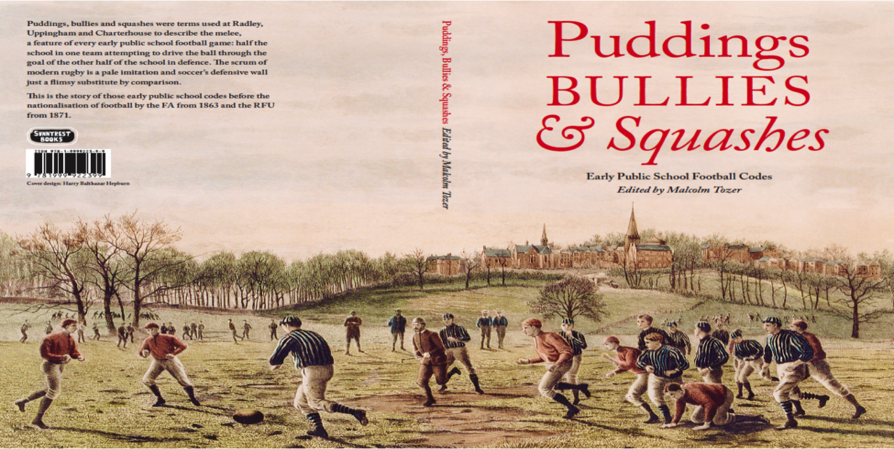 In September 2019, Declan O’Keeffe, College Historian, represented Clongowes at the British Society of Sport History Annual Conference in Liverpool Hope University, where he presented a paper entitled: “‘All the other boots and legs ran after’ – the long life and slow death of ‘Gravel’ football”.

Declan was subsequently asked to contribute a chapter on behalf of Clongowes to a book entitled Puddings Bullies and Squashes, Early Public School Football Codes.

Below is an excerpt from the chapter that deals with gravel football in the book:

“It is just one hundred years since the demise of the unique game of gravel football, which thrived in Clongowes Wood College for much of the Nineteenth-Century. Clongowes was founded in 1814 and the Jesuits brought with them the complementary seasonal diversions of cricket and gravel football accompanied by handball, paper chases, skating and hurling. ‘The Stonyhurst Game’, as it was called, embodied many of the elements of rugby, soccer and gaelic football and predated all three but would eventually succumb to the first two as they grew in strength and the needs of the school, which harboured it, changed.

The game was played on a gravel surface (to save the cricket grounds in the winter) with tall pine goal posts (without cross bars) facing one another diagonally across the ground. The balls, made in advance of each game by the college shoemaker, were small, weighed about twenty five ounces, quickly became misshapen and had to be replaced several times in a match. One Old Clongownian described his first view ‘of boys kicking very pebbly looking footballs’ and explained that ‘the flabby football…when…wet…became paved all over with little particles of gravel’. In this condition it was ‘truly horrible, a terror to many and a prolific source of fights’.

Play was advanced mainly through the primary skill of ‘forcing’ – that is dribbling the ball towards the opponents’ goal and one point was awarded for every score. The game was played from the start of September until St. Patrick’s Day, when the season concluded with the Colours Matches. These gala occasions, which foreshadowed the schools’ rugby finals of today, were a high point in the college calendar and were preceded by preliminary rounds to decide which team sported red and which green. Following a ceremonial march to the ground ‘with colours flying’ the rector gave ‘the initial kick-off’ before retiring ‘amid cheers’. Christopher Palles, Lord Chief Baron of the Exchequer, first president of the Clongowes [past pupils] Union, and arguably ‘the most distinguished Old Clongownian of [his] day’ recalled that for every goal scored on St Patrick’s Day ‘there was an extra pancake at dinner for the scorer, with the thoughtful proviso that a boy could transfer his extra pancakes to his friends!’

The only ‘out-match’ was that played against the gentlemen of the past ‘for the very good reason that they were the only people outside Clongowes who knew how to play the game’. The present pupils normally won these games over the past ‘because they tired early’. This is not surprising if the account of one such match is to be believed, in which the teams played for an hour and a half, ‘adjourned for dinner, and then went at it again for another hour and a half!’

Gravel football was extraordinarily popular in both Clongowes and Tullabeg as described in James Joyce’s Portrait of the Artist as well as in the writings of other Old Clongownians. This chapter tells the story of ‘gravel’, which had its own detailed set of laws, (including the peculiar provision that the first score was reckoned as only a half, to make draws impossible) and its place in the Ratio Studiorum that formally established the system of Jesuit education.”

The book is available for purchase from Amazon at this link.
Categories: Clongowes Stories Cultural Featured Library