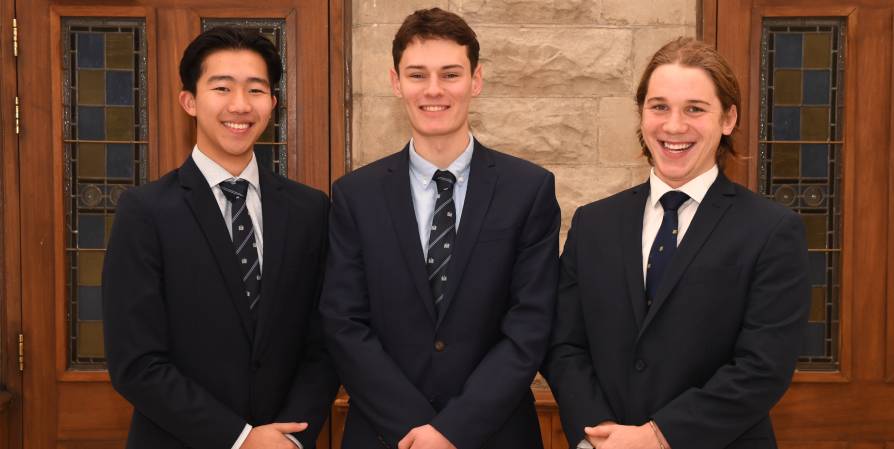 We recently welcomed our GAP students from Sydney, Australia who have travelled half-way across the globe to spend the year immersed in life here at Clongowes. As part of the GAP programme with our sister schools, six of our own Rhetoric 2019 graduates are currently living and working in the Sydney schools.

Michael Cheok, Finn McDonald and Jeremy Wells (pictured left to right) will be involved in all aspects of Clongowes life. Their duties include working in the dorms alongside the prefects, tutoring and coaching as well as assisting with various departments within the college. The boys told us a bit about themselves – where they come from and what they hope to achieve during their time here.

Michael Cheok lives in Lane Cover, a suburb on the Lower North Shore of Sydney which is not far from the school that he graduated from, St Ignatius’ College, Riverview. Michael likes to play basketball and rugby in his spare time. Over the coming year, he is looking forward to getting to know the boys and staff whilst immersing himself in the culture of the college. In 2021, he plans to attend the University of Technology Sydney to study a Bachelor in Sport and Exercise Science.

Finn McDonald attended St Ignatius College, Riverview and lives in the Lower North Shore suburb of Woolwich in Sydney. His various hobbies include; wakeboarding, surfing, rugby and cricket. He also loves to play and listen to music. He is keen to travel around Europe and hopes to study a flexible double degree in either Commerce and International Relations or Commerce and Law at the Australian National University (ANU), Canberra.

Jeremy Wells is from Northbridge, a suburb on the Lower North Shore of Sydney where he attended St Aloysius’ College. He plays rugby, cricket and basketball during his free time in addition to taking part in various athletics. Jeremy looks forward to meeting new people, both students and teachers, during his time at Clongowes and wishes to pursue a double degree in Engineering and Science at the University of Sydney when he returns to Australia.