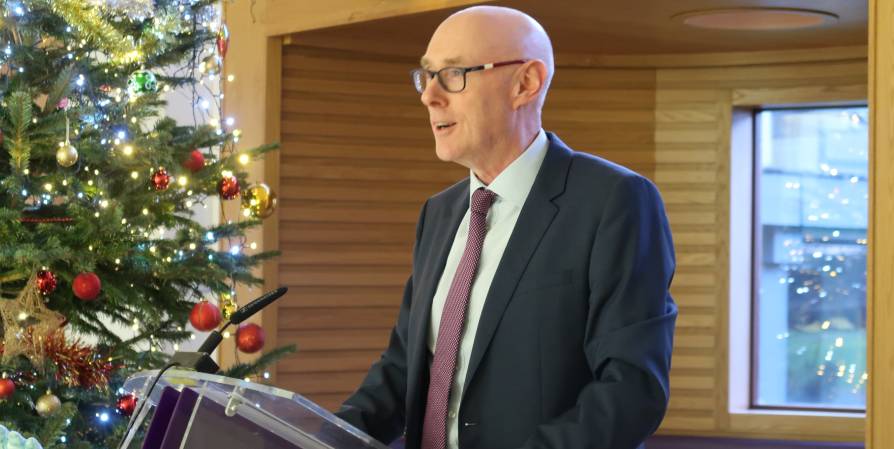 Headmaster, Mr Lumb delivered morning prayer in the Concourse this morning ahead of the Christmas break which begins this Wednesday. He told the story of Ebenezer Scrooge as he reflected on the importance of Christmas, of spending time with family and friends and of being kind to those less fortunate during this festive season.

“The end of term is very nearly upon us. Doubtless you, like me, are feeling ready for the break, looking forward to spending Christmas with your family and friends, as well as relishing having some quiet time for yourself.

The novel by Charles Dickens, A Christmas Carol, will be well-known by many of you. The rich and miserly central character, Ebenezer Scrooge, is a man portrayed as selfish and uncaring towards every one. When asked to donate some money for the poor, he snaps that he doesn’t “make merry” at Christmas and that he can’t afford to “make idle people merry either”.

His partner in business had been Jacob Marley, but Jacob had died and now sent three messengers – three ghosts – to Scrooge. The first, the Ghost of Christmas Past, shows Scrooge the happiness that he could have had if he had made different choices in his life. The second messenger is the Ghost of Christmas Present.  He shows Scrooge how happy his married nephew is, despite not having his uncle’s great wealth.  He is also shown the family of one of his employees, Bob Cratchit, who is poor, yet has a very happy life at home with his wife and children. His youngest child is Tiny Tim, a boy who has very poor health. Scrooge’s third visitor is the Ghost of Christmas Yet to Come.  He shows him that, in the future, he will sack Bob Cratchit.  With no income for the family, Tiny Tim will die. The Ghost then takes Scrooge to a tomb – his own tomb– and reveals that no-one will mourn his passing.  Scrooge learns, however, that, if he changes for the good, his life will be different. The negative things he has seen will not happen to him.

And so, the next day is Christmas Day, and as he awakes Ebenezer Scrooge is a changed person.  He gives a pay rise to Bob Cratchit and visits his family. The story goes on to reveal that Scrooge chooses to live thereafter in a positive and cheerful way, and so discovers happiness himself.

The character of Tiny Tim is shown to be the most generous and loving of all the Cratchit family in the Dickens novel.  His father’s Christmas day toast to the family is “A Merry Christmas to us all, my dears. God bless us!”, Tiny Tim responds by adding “God bless us, every one!”, His emphasis being that no one is to be left out. Coming from Tiny Tim, the one who was often left out because of his sickly condition and the one who was in danger of not being present to celebrate another Christmas, his comment, for me, emphasises the joy of sharing family time with others.  These two small words, ‘every one’, remind us that the blessings of Christmas are meant to be extended to all persons, every one of them, everywhere.

And so in the midst of all the traditions in this season of Advent that go to make up the sacred and the secular mix in the ‘Christmas spirit’ – cards, trees, presents, nativity plays, carols, holly, mistletoe, Santa Claus and the crib – Christians look forward to celebrating the birth of Christ on Christmas Day. Let us pray, in those simple words of Charles Dickens’ character, Tiny Tim, for all whom we love and all who will share our lives this Christmas:

A merry Christmas to us all. God bless us, every one!”