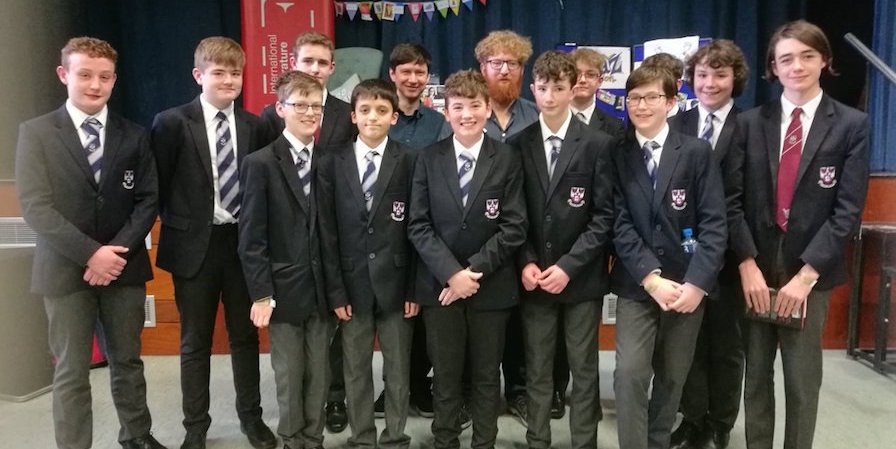 On Thursday, March 7th, a group of 11 from Elements and Rudiments (looking dashing in our formal dress!) departed early in the morning for a World Book Day event at The King’s Hospital along with Ms. O’Loughlin and Mrs. Lumb. As we stared in awe down corridors walked by Taoiseach, Leo Varadkar and broadcaster Kathryn Thomas we were welcomed by the students who led us past their canteen, where we examined their lunch menu and marvelled at their book cubby area!

The authors were great! The first section was about creativity and mental health. Dave Rudden, who had recently visited us in Clongowes (here), was interviewed by Elaina Ryan from Children’s Books Ireland. He told us about his struggles with depression and how he used writing as a retreat or refuge from his upsetting reality. It was very moving and interesting. Then a panel comprising Meg Grehan, Sarah Maria Griffin and OC Peadar Ó Guilín (1986) talked about their sources of inspiration and discussed the influence that music and stark images had on their writing.

Ó Guilín told us about the great inspiration he got from Irish mythology and we also found out that he was a Dungeon Master in Dungeons and Dragons and had introduced this role-play game to Clongowes in his time. Seán Hallissey – the current Dungeon Master in the college – told-him about our our recently re-established club. Then Sarah Marie Griffin told us about a book that she is working on which is based on Dungeons and Dragons.

Clongowes Writers of the Future

Then came the highly anticipated ‘Writers of the Future’ segment in which young people were given the opportunity to read or perform their writing. Marcus McElligott and Jack Shannon of Elements did us proud here, both reading extracts from works-in-progress and we were fascinated by the creativity of our peers. This session was hosted by the Dublin poet Colm Keegan, who then treated us to a live recital of his own poem about Dublin called ‘Crackle’. His performance was engaging and had us magnetised and he did a great job at affirming and encouraging all of the participants.

Finally, to finish off the event, we heard from award-winning UK author David Almond, whose best known work is Skellig. He told us about how his childhood and hometown influenced his writing and how his first encounter with writing led to a fascination with print that has remained with him to this day. We even got a sneak peek at his ideas notebook – full of illustrations and messy notes. This was where his ideas were first captured to be later documented and the ‘messy’ pages transformed to seemingly perfect pages of print.

Thank you so much to our Librarian, Ms. O’Loughlin for this trip to a World Book Day event and to Mrs Lumb for coming with us. It was so inspiring that on our return we re-grouped after school and decided to set up a Writing Club for Third Line. I think we all took a lot from it – including some new books for the library!

Clongowes continued to celebrate World Book Day this week with Drop Everything And Read, a literacy initiative that entails the normal timetable being dropped for 30 minutes to facilitate reading by students and staff. Pictures here. 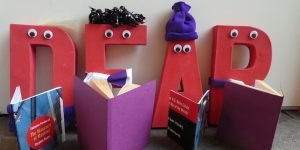