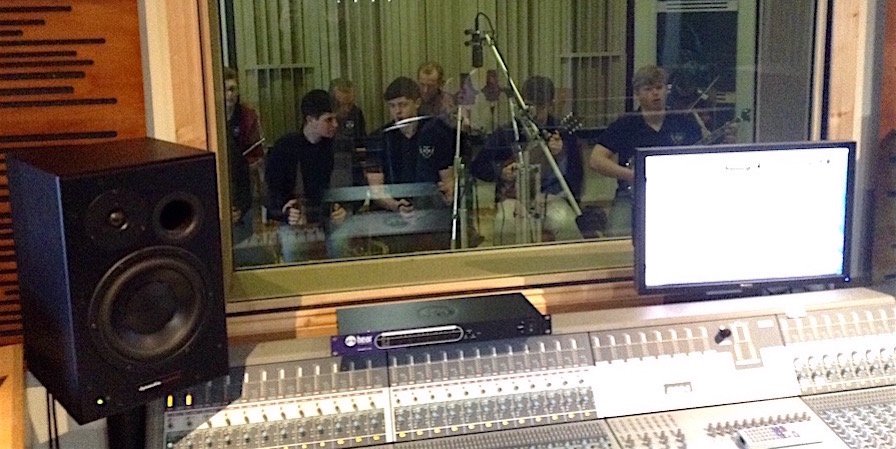 Earlier this month the Clongowes Trad Group undertook their most ambitious project to date when they travelled to Bluebird Recording Studios to record an album. With great excitement and anticipation the ten musicians accompanied by their manager, Ms Catherine Heslin and Messrs Shane Heslin, Noel Mason and Stephen O’Hara arrived at the facility set in beautiful countryside on the Dublin / Kildare border

The sound engineer, Declan, welcomed the group and soon they were in the recording booth tuning up and ready to go. It was a fascinating experience to see how much work and effort goes into the process of recording and the attention to detail involved as each tune had to be played many times in order to achieve the desired result. Declan confided that some groups could take up to five months to record just a few tracks, while our merry band had just six hours at their disposal. No pressure then.

Those of us who have seen the band live over the years will not be surprised to hear that they played their hearts out with intense concentration.   By lunchtime a welcome break was needed after which the boys took advantage of the beautiful day to get some fresh air and have a kick around before returning to the recording booth for one final push.

With renewed energy they resumed playing until – after many playbacks and tweaks – they were satisfied with the final result. Exhausted but very pleased they returned to school to the await the arrival of the master tracks and CD to follow.

Listen to one of the tracks that was recorded on the day, “The Clare Jig – Rose Among the Heather”

Started in 2008 by Clongowes music teacher, Ms Catherine Heslin, the Clongowes ‘Trad Group’ is a collaboration of students from all year groups as well as staff members. The group is made up of musicians playing a variety of musical instruments including the fiddle, flute, tin whistle, guitar, banjo, mandolin, cajón and bodhrán. The group meets once a week to rehearse and they are regular performers at school events as well as outside of the college and have also raised much money for Trócaire over the years. 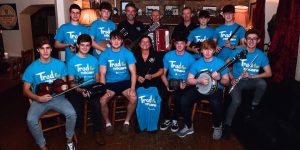