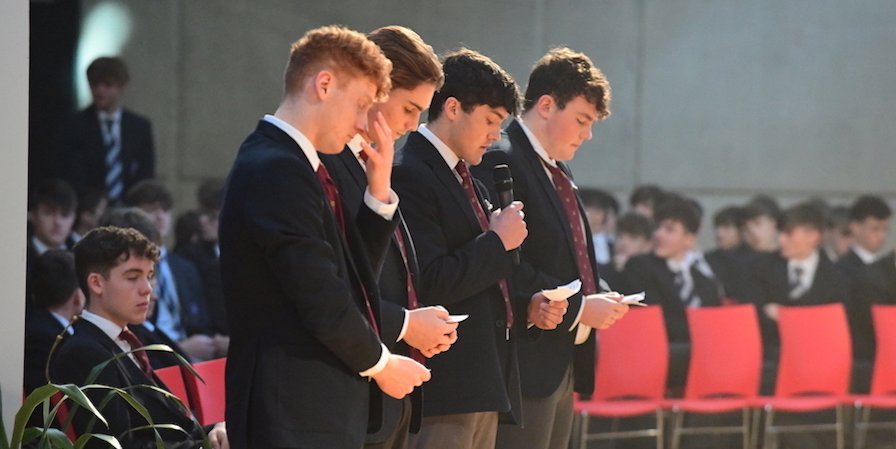 Yesterday (November 11th) Remembrance Day was observed around the world with silence and the tolling of bells to recall the end of hostilities of World War I on this date in 1918. The conflict had formally ended ‘at the 11th hour of the 11th day of the 11th month’, in accordance with the armistice signed by representatives of Germany and the Entente earlier that morning. This momentous event was marked in Clongowes with a special Mass at 11.30, which also remembered the fallen from Clongowes and the many other Irish men who gave their lives in the Great War.

A wreath of poppies was laid by the Headmaster, Mr Lumb, while music from Schola, poetry readings from our own Tom Kettle (OC 1897) and Wilfred Owen and the use of film clips made for an evocative and moving liturgy that touched all who attended. During the service, the names of the 95 Old Clongownians, who gave their lives during the conflict, were read out and each recitation was matched by a student standing to commemorate the sacrifice. 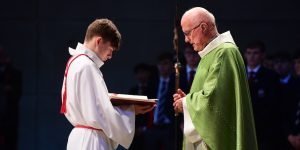 In 1914 Old Clongownians had responded to the urging of John Redmond (himself a past pupil) and played a prominent role in the Irish contribution to the Allied effort in The Great War. Over 600 past pupils participated in the war and 95 lost their lives The names of the fallen are inscribed on a brass plaque just outside the entrance to the Boys’ Chapel (just inside the ‘Shrine Door’). Among them were Redmond’s own brother, Willie, and Thomas Kettle journalist, barrister, writer and Home Rule politician, both of whom saw service and met their deaths on the Western Front.

These men and their peers saw themselves as fighting for Ireland as much as the Clongownians who took part in the Irish Revolution and the ensuing tragic Civil War. Past pupil John Vincent Holland won a Victoria Cross – the highest decoration of the British forces – fighting with the 16th Division of the Leinster Regiment at Guillemont in the Somme in September 1916, while 41 others won military crosses. In all, Old Clongownians have been awarded four Victoria Crosses – in the Crimean War, the Boer War and both world wars. 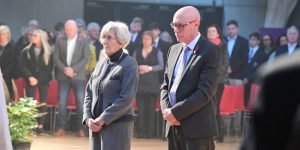 In October 2014, a group from the Clongowes Wood College community with some alumni and friends visited Flanders and the Somme to commemorate the contribution of Old Clongownians and Irish Jesuits to World War One. The trip turned into parallel individual and collective commemorations of fallen soldiers in WWI, as we found graves and markers for members of family, the Society of Jesus and the Clongowes school community. (Report here).Whatever cause they gave their lives for, there is a kind of peace in these cemetery cities where they lie. Tom Kettle suggested as much in a letter he wrote shortly before his death:

I hope to come back. If not, I believe that to sleep here in the France that I have loved is no harsh fate, and that so passing out into silence, I shall help towards the Irish settlement. Give my love to my colleagues – the Irish people have no need of it.

At the going down of the sun and in the morning, 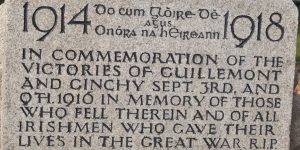 Categories: Clongowes Stories Ethos Featured News of The Past