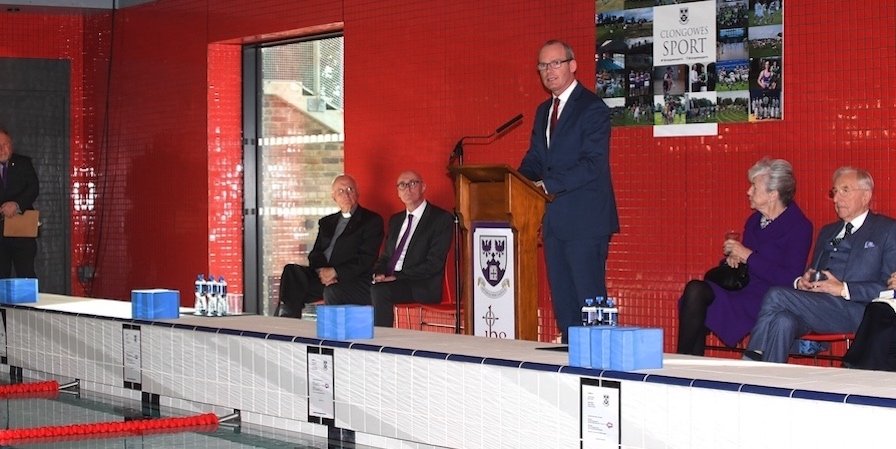 The pool, which is available to local schools to use, is the latest addition to a portfolio of exciting new developments that include the 1,000m2 Sports Hall and Gymnasium and the recently refurbished Vincent Murray Park, with its artificial playing surface. The new pool was made possible by the generosity of Mrs Carmel Naughton who, with the support of the Naughton Foundation, was the principal donor. 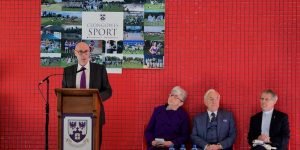 In his introductory speech, the Headmaster, Mr Chris Lumb, said:

This magnificent pool is the latest addition to the development of sporting facilities alongside the Sports Hall and Gym, and the resurfaced all-weather Vinny Murray Pitch.  It is an outstanding facility which will allow, once again, for swimming and water sports to become areas of sporting excellence in Clongowes whilst, at the same time, encouraging boys to use the pool for general exercise and recreational purposes.

Welcoming Minister Coveney back to Clongowes, the Headmaster noted that he was a fitting choice to launch the new pool as he had been a member of the swimming panel whilst in Higher Line, during which time he gained an Award of Merit in Life Saving. Browsing through Simon’s back pages from his time in Clongowes Mr Lumb noted how he began to blossom in his later years, with appearances in the senior plays.  In Rhetoric, Simon was not only a member of the rugby Senior Panel One but was beginning to show some of the stuff that would bring him to high public office when he was appointed a House Leader in the school. 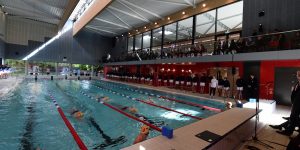 Opening the facility, Deputy Coveney welcomed the vision of those who had ensured that this centre of excellence would come to fruition. He recounted how – despite being a good rugby player – he spent just as much time in the waters of the old pool as he had on the grass with oval ball in hand. Addressing the students present, he urged them to avail of the many opportunities offered them in this school, which seeks to educate boys to become leaders in society in line with our Jesuit mission to form ‘Men for Others’. Citing his own education in Clongowes and his career since, he urged them to remember that privilege comes with responsibility and that we all have a duty to set the highest standards for ourselves and others.

Earlier Mr Lumb had given a special welcome to Carmel and Martin Naughton, and members of their family, without whose extraordinary generosity the provision of this state-of-the-art pool would simply not have been possible. Mrs Naughton was instrumental in making this gift, and the principal donor, with the Naughton Foundation supporting.  The Headmaster also thanked the Provincial, Fr Leonard Moloney SJ and the Irish Province of the Society of Jesus for their support of the project. 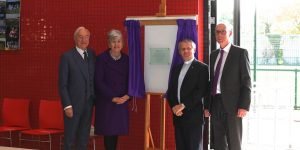 In response, Mrs Naughton spoke fondly of her own education in water sports at the behest of her late father, who had insisted that his six daughters learn to swim in a cold lake near their home. She contrasted that experience with the facility on offer to Clongowes boys, noting the importance of such centres of excellence in the community and applauding Clongowes for their provision in this and other areas, such as Science, Art and Music. She closed as she had begun by referring to the importance of learning to swim – not only for sport and recreation – but also as a valuable skill, which may be needed some day to save a life.

The Headmaster was delighted to welcome the Irish Jesuit Provincial and erstwhile Headmaster of Clongowes, Fr Moloney SJ back to familiar surroundings and thanked him and the Irish Province of the Society of Jesus for their support of this project. It was his vision and drive, during his tenure as Headmaster, to develop the College’s sporting facilities, which led to plans being put in place for the Sports Hall and swimming pool complex which we now have. Fr Moloney echoed Mrs Naughton’s thoughts before speaking of the importance of water, which is a gift from God, that Man cannot create. He then blessed the pool before giving way to an entertaining display of swimming under the watchful eye of coach, Niamh Moran.

In his opening remarks, the Headmaster had thanked the Board of Management and Chairman, Peter Gray as well as the College Foundation, led by Joe Rooney, for their support of this project; the professional team of Andrew O’Kelly, the Project Manager and QS; Paddy Fletcher, our Architect and his design team, and John Tracey of Tracey Brothers, the Main Contractor. Thanks were also due to the in-house team led by Denise Nichol (Director of Finance and Administration) and her predecessor, Ray Kenny; and the Facilities Manager, Ardan Haverty (Facilities Manager), and before him Pat Keenan, who were on site day-to-day with the contractors throughout the duration of the project> He also expressed gratitude to the many colleagues who have been involved in the organisation of today’s festivities, co-ordinated by Frank Kelly and his PA, Irene Fitzpatrick, and our Director of Sport, John O’Donoghue.

The Swimming Pools in Clongowes

When the predecessor to the new facility (the ‘baths’ of fond memory) was opened in 1887 it was part of an ambitious building programme that included the Big Study and the old Refectory (now the James Joyce Library). In like manner, this pool is the latest addition to the development of sporting facilities alongside the Sports Hall and Gym, and the resurfaced all-weather Vinny Murray Pitch. It is an outstanding facility which will allow, once again, for swimming and water sports to become areas of sporting excellence in Clongowes whilst, at the same time, encouraging boys to use the pool for general exercise and recreational purposes. 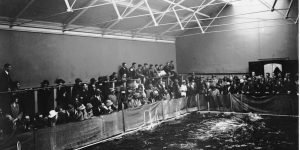 The pool has been noisily much in demand since it entered service with – it seems – the whole school (whether wet behind the ears or not) eager to dip more than their toes in the water to much positive effect.Before Christmas, Transition Year students began to take Lifesaving Lessons for a Pool Life Guard Course, while in May, thirteen of our boys took home an impressive twenty-one medals from the Leinster Schools Confined Swimming Gala in Kilkenny.

The amalgamation of Clongowes and Tullabeg in 1886 brought the new college into the modern education system that had commenced seven years earlier with the introduction of the Intermediate Education Examination (now the Leaving Cert). The school has gone on from then to produce generations of successful students as well as many successful sportsmen. The addition of the swimming pool to the existing suite of sports facilities will continue to ensure the essential combination of healthy minds and healthy bodies as we continue through our third century. 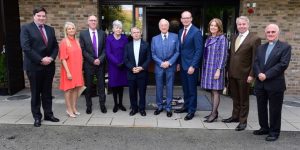