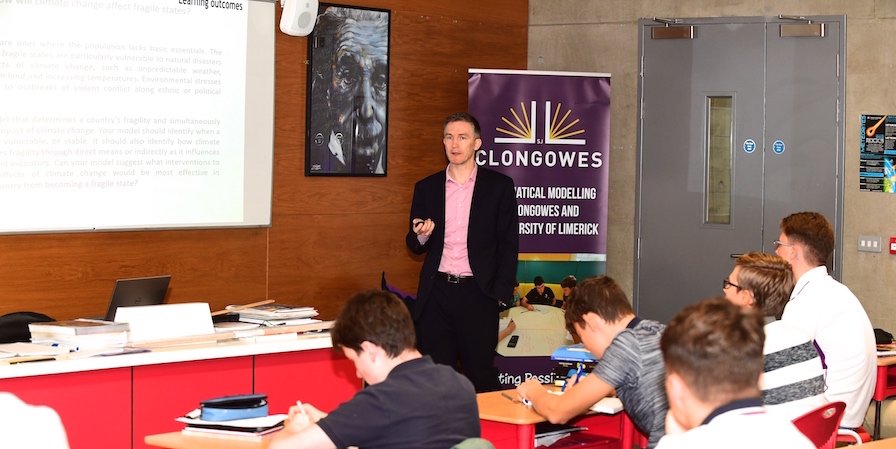 Clongowes physics and applied maths students are again involved in research projects with the University of Limerick. This will be the sixth year that the science department will link up with the Mathematics Applications Consortium for Science and Industry to develop mathematical models for real world problems.

Professor James Gleeson, a world leader in his field, visited Clongowes on Friday (12thOctober) to launch the first phase of the project. He met with over 40 students from Syntax and Poetry to introduce the concept of Mathematical Modelling and its power to solve real world problems. The professor gave a fascinating insight into the applications of mathematics in the real world and how it is used to solve problems in all aspects of life and then introduced this year’s problems:

These are not stated as mathematical problems, they are real world problems and it is the students’ job to develop mathematical models describing them.

Professor Gleeson spent time with each group listening, guiding, challenging, and inspiring the students.  The young problem solvers are in the first phase of the project where they will brainstorm ideas, decide what variables could be involved in the system, discern which to analyse and then gather the appropriate data. He will return to Clongowes in November to monitor the boys’ progress and formally launch the second phase involving the development of the actual models describing these systems.

Professor Gleeson will visit Clongowes again in April for the third and final phase, which will involve testing the models with possible re-evaluation and re-testing, after which the students will complete a report and make a final presentation in the University of Limerick in May on the model which they develop.

Professor Gleeson pointed out to students that Daniel Giles of the first maths modelling group in Clongowes eight years ago, who was a participant in the European Study Group with Industry in 2016, while doing a summer internship with him in UL, has been awarded a €100,000 bursary by the Irish Research Council to pursue his PhD in the area of mathematical modelling of tsunami inundation.

The Mathematical Modelling project is unique to Clongowes and is a fantastic opportunity for our students to get involved in real world applications and to see how problems in science and industry can be dealt with using physics and mathematics. Special thanks must go to Professor Gleeson, through whom this link has been established, for giving up his valuable time to take part in this project and also to Mr Stephen O’Hara for the massive amount of time and enormous effort he puts into the project every year