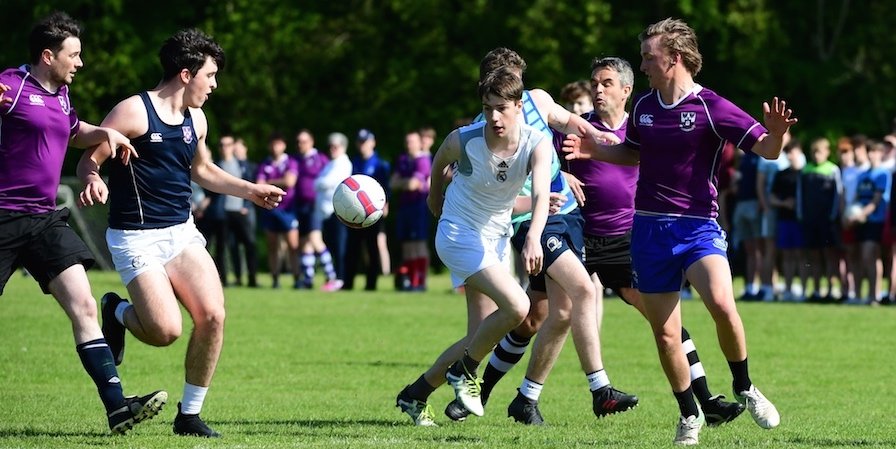 Last week saw 67 Rhetoric students take a break from their books to venture against a very prominent Magistri side in this years annual Staff v Students soccer game. Rhetoric had a lot on their shoulders if they were to live up to the display shown by their immediate predecessors, the first team to overcome the Magistri side since 2010, but they seemed confident they could pull it off.

Rhetoric started off the game with a team predominantly made up of Senior Panel 1 (SP1) members and were 1-0 up after 10 minutes due to a sublime penalty kick by Connell Kennelly. However, the staff side didn’t let this early lead get their hopes down as they continued to show great aggression at the back with rock solid defending from Messrs Matthew Wright, Emmet Condron and John O’Donoghue to name but a few, to forestall another goal being conceded. However the Magistri had other plans and great link up play from Messrs Garry Corcoran, Liam McGovern, Daryl Maxwell and Eoin Lenehan, led to a superb team goal applauded by all.

When the first rotation took place after 15 minutes the ‘Social’ team was hoping to build on the scoreline. However, the Magistri were looking to build on their momentum and pushed for another with multiple attempts on goal from all members of the team and finally great link up play from the staff side led to another goal, giving them a 2-1 lead just before referee Brendan Shalvey blew the half time whistle. Half time saw both teams assemble in their respective groups with Rhetoric managers Yuxuan Liu and Owen Hegarty giving great words of wisdom to their players. 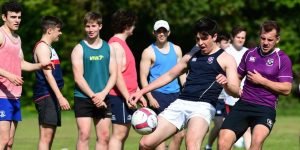 The third quarter commenced with Rhetoric fielding their Senior Soccer team in the hopes that their experience could get them back into the game against what seemed to be a fatigued staff side, however, the Magistri continued to show great resilience with a stunning free kick from Corcoran forcing goalkeeper Ben Matuschka to go full stretch to stop the ball getting over the line in what would have undoubtedly been, the goal of the day. With minutes left before the final rotation, Ciaran Lynch made a darting run up the right wing before delivering a pitch perfect pass to Max Rowan, waiting in the box with the easy job of tapping it in pass the keeper and into the net.

With 15 minutes left on the clock, Rhetoric underwent their last rotation of the game fielding a physical Senior Panel 2 side eager to snatch the win for their peers. With brilliant attacking play from both sides, and chances being created at either end of the pitch including Jack Dowling’s 20 yard shot which rattled the crossbar, there was still nothing to separate the two sides at the final whistle, calling for a penalty shoot out to decide the victors. As many shots were saved as scored in the tie break and it fell to the Rhetoric goalkeeper, David O’Connor to save the ultimate Magistri penalty for a 3-2 victory in the endgame.

Joy was unconfined and could be heard from the 1929 building as the Rhetoric boys celebrated their victory, their names logged in the history books of the school.After the game Michael Medeiros gleefully accepted the Brendan Cullen perpetual trophy on behalf of the Rhetoric team.  A big shout out to all involved in running the event, in particular Mr Garry Corcoran who organised and coordinated the whole occasion and produced a very successful and enjoyable contest.