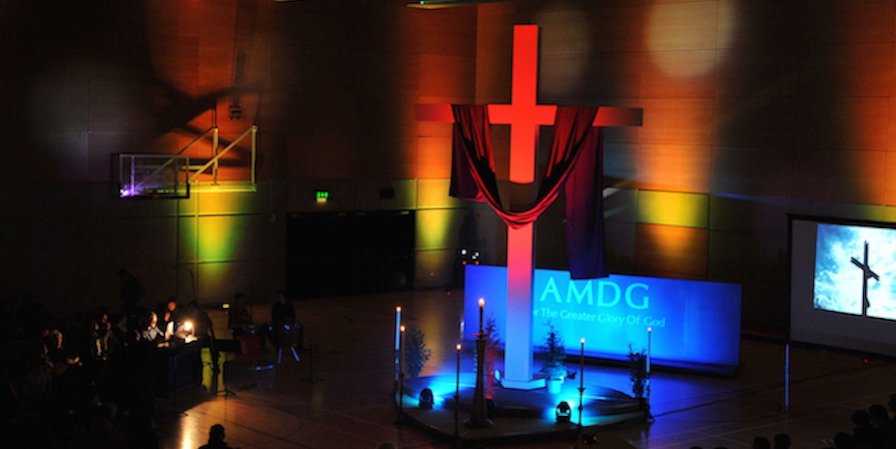 Tenebrae: Passion and Death in the Sports Hall

Tonight (Wednesday 21st March) saw this year’s Tenebrae Service staged in The Sports Hall at 21.00 for the entire school. Together with the Clongowes Schola under the baton of Mr Cyril Murphy we had several guest performers as well as some home-grown talent from among the students and staff. The former included the acclaimed young soprano, Ioana Constantin-Pipelea, who gave an unforgettable performance of Cyril’s new composition ‘Eli Eli Lama Sabachtani’.

Tenebrae (Latin for shadows or darkness) is an ancient Christian liturgy of Holy Week dating back to the Middle Ages. It comprises a prolonged meditation on Christ’s suffering in the days leading up to and including his Crucifixion. The service is a semi-dramatised re-telling of The Passion and Death of Our Lord Jesus with some contemporary reflections, which brought the narrative afresh to the students in a vivid and modern presentation. Music portrays his pathos and the power of silence and darkness suggest the drama of those days.

With special lighting and through the use of atmospheric music, readings, film and contemplation the dark drama of Good Friday and our Lord’s sacrifice for us was richly commemorated. The whole liturgy, lasting just over an hour, charted Christ’s ultimate victory over death and was really well received by a full hall of very attentive and engaged students as well as many invited guests, parents and staff.