‘Can we talk about Jesus?’ - Clongowes Wood College

‘Can we talk about Jesus?’

Home / News / Clongowes Stories / ‘Can we talk about Jesus?’ 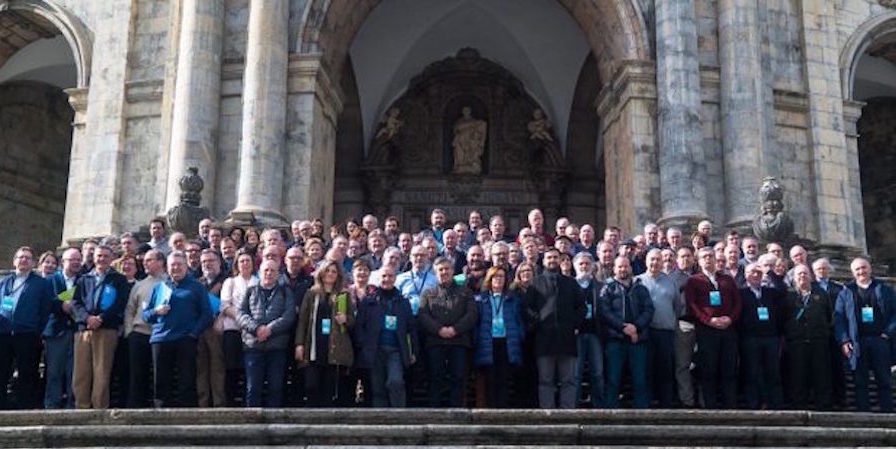 Over 120 Jesuit school principals, including our own Mr Chris Lumb, spent four days together discussing the challenges and opportunities that the plurality of religions in Europe pose for them in their roles. Principals from Irish Jesuit schools travelled to The Loyola Retreat Centre in Spain last week to meet with their counterparts from all around Europe at the Jesuit Secondary Education Conference (JECSE). They discussed the question ‘Can we talk about Jesus – Jesuit schools in a multi-faith context?’. See video clip here.

According to Brian Flannery, Education Delegate for the Irish Jesuits and conference steering committee member, ‘The plurality of religions found in Europe today is both enriching and challenging. We have a more colourful public discourse but we can encounter barriers – sometimes the very mention of the name Jesus can inhibit dialogue, even within the Catholic tradition. We wanted the conference to consider this contradiction and to give confidence to our head teachers that Jesus, far from being an obstacle to dialogue, can become the source and the means of an open, deep and fruitful dialogue in a multi-faith world’.

Two keynote speakers at the conference helped with this process. British Jesuit and former headmaster Adrian Porter guided delegates through five key experiences of Christ in the life of St Ignatius. It became Ignatius’ mission to share these experiences and Fr Porter translated them into five key questions for head teachers in Jesuit schools:

An ‘alternative vision of life’

‘Adrian was very strong on proposing an ‘alternative vision of life’ to students in Jesuit schools, different to what they’re being bombarded with from popular culture on a daily basis,’according to Brian. ‘He talked about the importance of creating opportunities for students to ‘bump into’ the person of Jesus. This can be done through liturgy, prayer, challenges raised in class discussion, and an emphasis of the importance of relationship and community in the school.’

The second speaker was Dennis Gira, a theologian, and French writer of North American. ‘He’s also a specialist in Buddhism, and he struck an alternative chord,’ says Brian. ‘He offered rules of engagement for real and effective dialogue, including the adoption of a profound respect for the ‘other’ without pre-judgement and with complete openness to them.’ Gira also stressed the importance of being aware of the real challenges posed by inter-cultural dialogue, says Brian. ‘He gave the striking example of how – in western culture – the table is the centre of the living room as a spot where people gather to eat and talk and share together. The westerner in a Japanese house finds themselves very disoriented because there is no table – simply an open space. Consequently they find themselves at a loss regarding how to communicate and interact with those present. Yet this is precisely the gap that has to bridged and it’s not easy’.

The diversity that is Europe

As well as talks and reflections, the principals really enjoyed the opportunity to interact and dialogue with other principals from different countries, in the ‘dymanic’ groups. There were as many as 18 counties represented, and 12 languages spoken, but English, French and Spanish were the primary forms of communication. ‘In JECSE you’re trying to hold together in microcosm the diversity that is Europe with all its challenges, political, educational and linguistic,’ Brian noted.

The group also spent time reflecting on the challenges identified by Fr General Arturo Sosa SJ at the congress for Jesuit education delegates held in Rio de Janeiro in October 2017, namely: innovation; education for justice; education in care for our common home; safeguarding children; experience of the transcendent and global citizenship. ’Each delegate was able to work with a group on three of these themes in a ‘world café’ model of engagement, to share and consider how best to meet the challenges,’explained Brian, adding, ‘The event was shot through with moments for reflection, meditation, and meanderings in the grounds of the place where the founder of the Jesuits would have walked.’