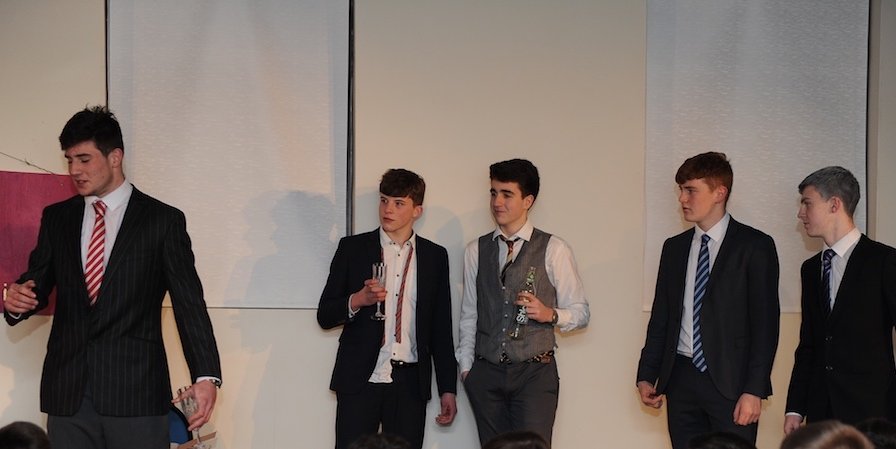 Just before the snows came and made our best-laid schemes ‘gang agley’, Poetry visited the Grand Canal Theatre in Dublin for a production of Shakespeare’s shortest tragedy Macbeth, courtesy of generous sponsorship from the Parents’ Association. ‘The Scottish Play’, as it is often dubbed by superstitious actors, dramatises the damaging physical and psychological effects of political ambition on those who seek power for its own sake. A tale for the ages you might say.

This unorthodox production by The Icarus Theatre Collective was aimed at the ‘Game of Thrones’ generation and it showed in the several carefully choreographed fight scenes, which demanded much of the cast and which seemed to enthuse our boys. Lack of convention was also to be seen in the recasting of several of the male parts as females – none more striking than Macduff, nemesis of the eponymous man who would be king. This doesn’t mean that the men were played by women; rather that the role was re-imagined as that of a woman.

The ubiquitous Bard of Avon wrote Macbeth around 1609, and since then it has been the most performed of his works – more than any other of the great tragedies. This was not the 5th years’ first exposure to the play (outside of the classroom) as they witnessed another reimagining of the text two years ago at the hands of Mr Tom Carroll when the present Rhetoric (then in Transition Year) gave us a memorable re-working of the text, Macbeth Unlimited (pictured above) that involved no little song and dance to the words and music of ABBA.

Many thanks to the Parents Association for their ongoing support of initiatives such as this. We hope that the production will have given the boys an ever greater appreciation of Shakespeare’s original text and the rich language to be found therein and that it will add to their understanding of the play when they revisit the classic version over the next fifteen months.

(Pictured above are Daniel Beggs in the title role wrestling with his conscience watched by Ben Matuschka, Manuel Ortega, Aguado, Anthony Ryan and Luke MacQuillan)