A Champion at the Front - Clongowes Wood College

A Champion at the Front

Home / News / Clongowes Stories / A Champion at the Front 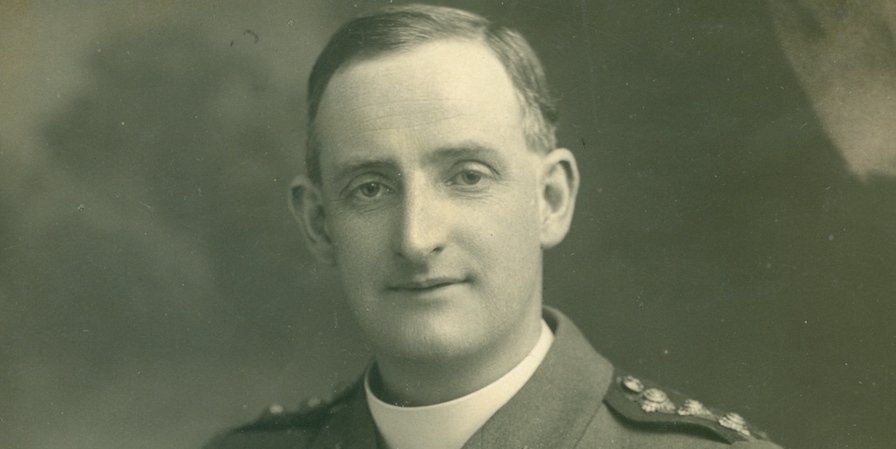 Although Fr Willie Doyle SJ (1873-1917) was not educated at Clongowes Wood College, he was distinctly Clongownian in nature. Our annual journal, ‘The Clongownian’ exists because of him, as he was its founder and first editor. He also argued successfully for the proposal to establish the Clongowes Union…

Saturday 3rd March marks the birthday anniversary of Willie Doyle, who was killed in the Battle of Passchendaele, Flanders, 100 years ago last year. He was one of 32 Irish Jesuit chaplains in the First World War. His life and the lives of his fellow-chaplains were commemorated, around the centenary date of his death on 16th or 17th August (exact date of death unknown), at a number of events in Dublin. The exhibition ‘Jesuit Chaplains in the First World War’ continues its tour in April 2018 at Stillorgan Library, Dublin where material relating to Jesuit chaplains in 1918 and Fr Doyle will be on show.

To us today the First World War can only be seen as an indescribable waste of life, a cause which served no purpose other than the decimation of an entire generation. Willie Doyle served and died in the Great War; he willingly put himself forward again and again to help those with him, and in the end it cost him his life.

Willie Doyle was born in Dalkey, just outside of Dublin, in 1873, the youngest of seven children. His education took place both in Ireland and at Ratcliffe College, in Leicester. At eighteen he joined the noviciate for the Society of Jesus, a decision he reached after reading Instructions and Consideration on the Religious State by St Alphonsus. In 1907 he was ordained as a priest, and spent several years following as a missionary, travelling from parish to parish all across the British Isles.

With the outbreak of the First World War in 1914, Doyle volunteered, knowing that many would be in need of guidance and assistance in the time to come. He landed in France in 1915 with the Royal Irish Fusiliers, serving as chaplain. He went to the front, serving in many major battles, including the Battle of the Somme. Out on the battlefield Doyle risked his life countless times, seeking out men where they fell dying in the mud to be with them in their last moment and to offer absolution; those who served with him described him as fearless. His selflessness was not just given to those who shared his faith; Doyle was a champion too among the Protestant Ulstermen in his battalion.

In August 1917 he was killed by a German shell while out helping fallen soldiers in no man’s land. Three other Irish Jesuits were killed in the war along with two who died from illness. Doyle was awarded the Military Cross, and he was put forward for the Victoria Cross posthumously but did not receive it. According to the National Museum of Ireland, this was arguably due to the ‘triple disqualification of being an Irishman, a Catholic and a Jesuit’.

The commemoration last year by the Irish Province took the form of an exhibition on Fr Doyle, which was launched at Dalkey library, and the National Museum of Ireland exhibited some of his chaplain effects from the front. Bernard McGuckian SJ tells his story as part of a collection of essays in the book Irish Jesuit Chaplains in the First World War. The Clongownian 2017 contains an essay on Willie Doyle’s connections with Clongowes entitled ‘Distinctly Clongownian: Fr Willie Doyle SJ’, and you may read a copy of it here.