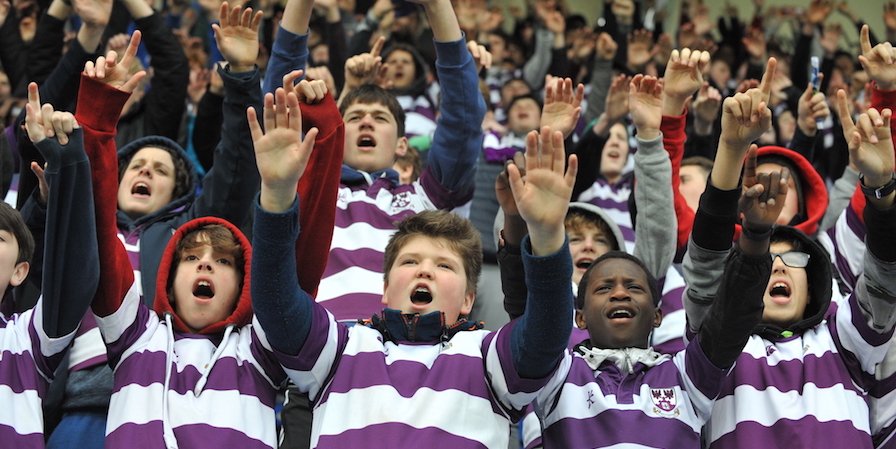 It’s that time of year again, when the young men of Clongowes don the purple and white to represent the school on the rugby field. While this has been happening since the boys returned to school last August there is nothing to quicken the pulse quite so much as the sight of 15 young men striding out on to the pitch ready to give their all for the school in the Leinster Senior and Junior Cups.

While the IRFU was founded in 1874 it was some fourteen years more before ‘some Clongowes students asked the Higher Line Prefect to have rugby posts erected’ and not until 1923 that Clongowes entered the lists in the Leinster Schools Senior Challenge Cup. Success came early with a somewhat controversial victory over our sister college, Belvedere in 1926 but was not to be repeated at senior level until 1978, since when the older boys have won the competition on seven more occasions (1978, 1988, 1991, 1998, 2000, 2010 and 2011).

The Leinster Schools Junior Challenge Cup was inaugurated in 1909 but Clongowes did not enter the competition until 1944, when we won the trophy at the first time of asking. An appropriately ‘purple’ patch followed with further victories in 1947, 1949 and 1952, while we also came second in 1945 and 1948. Despite four more final appearances over the next six decades success was not to be experienced again at this level until 2008.

The latest instalment of both of these historic competitions is almost upon us with the senior boys in action later this week and the juniors playing four days later (details below). The ‘23rd man’ (this means you!) has always been an integral part of the cup campaign and so we encourage you to come along and support the boys as they get the purple machine rolling along the roads to the RDS and Donnybrook in March.