A Time of Expectant Waiting 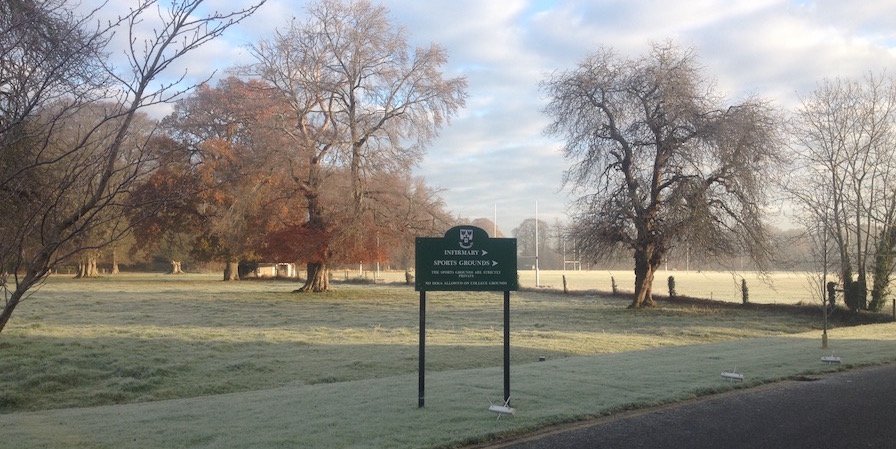 Yesterday morning, as we drove up the timeless main avenue girt by centuries’ old lime trees and approached the castle squatting snugly in the winter sun, we marveled anew at the wonders of nature and at the handiwork of the Creator. The clear crisp air and winter sun that lit the pleasure grounds and sports fields alike might easily have duped us into thinking that it was still ‘forever autumn’ instead of a mere three weeks from the winter solstice and the longest night of the year.

As the splendour of the scene and the grandeur of His creation continued to enthrall us we paused for a moment to take stock before the business of the day overcame us and the world returned to normal.

… Jesus was a sailor when he walked upon the water,

And he spent a long time watching from his lonely wooden tower,

He said all men will be sailors then until the sea shall free them.

This vision of Jesus as a saviour to whom we only turn in times of need is one of many manifestations of the Christ, whose birth we will celebrate in just over three weeks time.

Jesus has never been all things to all men but he has been many things to many. Another songwriter, Jackson Brown saw him as a rebel and wondered how easily our modern celebrations of Christmas would sit with the man whose anger cleared the temple of moneychangers:

… we guard our world with locks and guns

And we guard our fine possessions;

And once a year when Christmas comes

We give to our relations;

And perhaps … a little to the poor

If … generosity should seize us

But if any one … should interfere

In the business of why there are poor

They get the same as the rebel Jesus

Christ WAS a rebel. Born a Jew, he rebelled against the orthodoxies of his faith and replaced the God of anger with a God of love. The Jews hoped that he would lead them to freedom against their Roman overlords, but he was careful to avoid that confrontation and sought to keep church and state separate, when he urged them to ‘Render unto Caesar the things that are Caesar’s, and unto God the things that are God’s’. When he failed the Jews they handed him over to their oppressors, who were glad to put down another rebel leader, and he died for his trouble – and for us.

St Ignatius was a rebel too. Like Christ, who inspired him, he chose to work within the system rather than to confront it – and to be a ‘quiet, contagious influence’. By adopting this approach he managed to subvert the Church of his day and lead its reformation. Ignatius also encouraged us to find God in all things. It can be difficult to find God in anything at Christmas – let alone in all things – unless misfortune should befall us and – like drowning men – we see him and call clumsily for his help.

This week we entered into the period of Advent, a time of expectant waiting and preparation for the celebration of the nativity of Jesus at Christmas – the second most significant feast in the Church calendar. When we were children we could never understand how Easter was more important than Christmas – after all, we got much better presents at Christmas.

We can easily treat Christmas as though we were still pagans – still celebrating the Roman festival of Saturnalia that it replaced and losing God in all things instead of finding him. Losing sight of Him in all the things that swamp this season. The food. The drink. And the toys.

Since the time of St Bernard of Clairvaux, Christians have spoken of the three comings of Christ: in the flesh in Bethlehem, in our hearts daily, and in glory at the end of time. While the end of time is hopefully still some distance away (as we yet have much to do), we will shortly remember the coming of Christ in the flesh in Bethlehem and do well to keep that clearly in our sights over the coming weeks (as well as keeping him in our hearts daily).

We like to think that the rebellious St Ignatius would have been proud of Clongowes had he visited and he would undoubtedly have felt his heart soar and his soul sing on such a morning. What is certain is that – as he surveyed the scene before him – he would have been quick to say that all Glory be to the Father and to the Son, and to the Holy Spirit, as it was in the beginning, is now, and ever shall be, world without end.