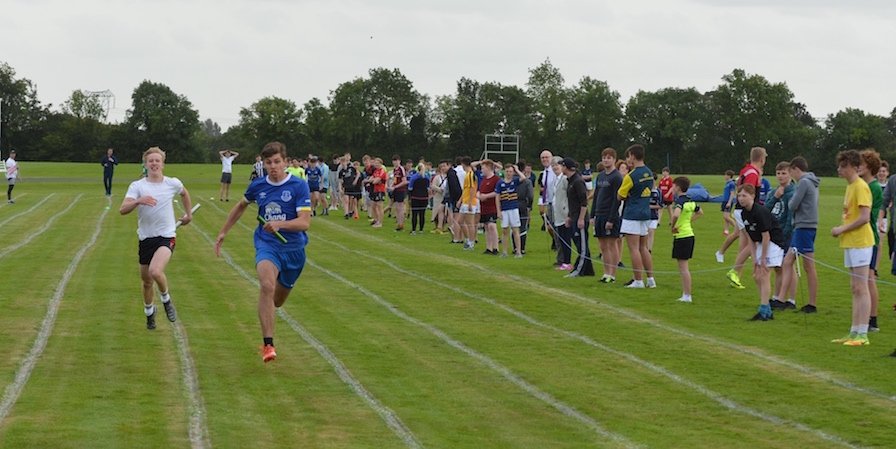 Having been thwarted by inclement weather last year, the students were not to be denied on Wednesday (September 6th) when the Inter House Sports Day took place in Clongowes. Although the day dawned a little cloudy and cool it soon warmed up when the games commenced. ‘Citius, Altius, Fortius’ as the Latin scholars would have it and indeed a great many of the athletes went faster, higher and stronger in their quest for the much-coveted Aloysius Bowl for the victorious house.

While all participants are to be praised for their efforts in pursuit of the Corinthian ideal, joy was unconfined amongst the members of Loyola House led by David Morrin and Ben O’Shea, who enjoyed a convincing victory against all comers. Their patron saint may have carried a career altering injury from an early age but these young men showed no sign of infirmity as they fought with heart and hand on the track and in the field. After many a twist and turn and plenty of running, jumping and throwing, they emerged triumphant with 448 points and proudly received the trophy from the Headmaster on the steps of the cricket pavilion.

After they had showered and changed the students reassembled in the refectory, where the headmaster presented the awards for the best athlete in each year (see below). Head of Sport extraordinaire, Mr John O’Donoghue thanked all involved for their help in making the day such a success: all those who competed, the staff and GAP students who adjudicated, the maintenance staff for preparing the grounds and the catering staff for an early ‘Christmas Dinner’ to round off the day.

Best Athlete in Each Year