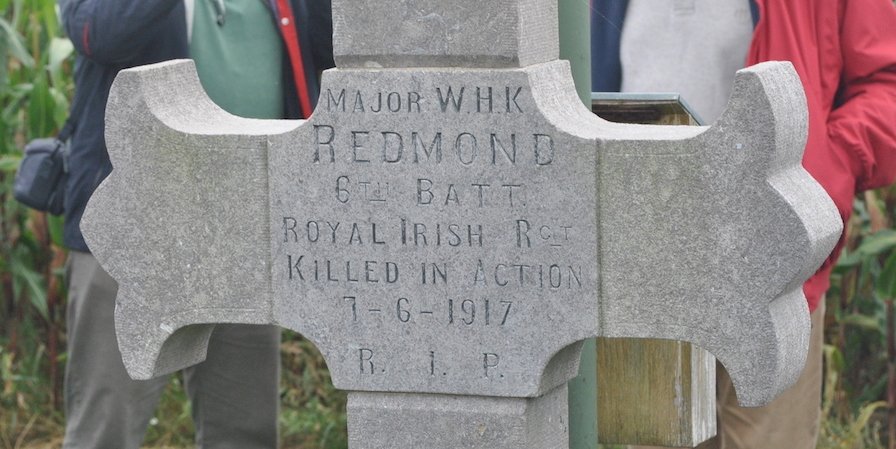 William (‘Willie’) Hoey Redmond (13th April 1861 – 7th June 1917), nationalist politician and soldier, was born in Liverpool, but grew up in County Wexford. He attended Clongowes in 1873-6. He was the younger brother and close confidant of John Redmond, although much more outgoing in personality. He spent time as a merchant sailor and contemplated the army as a career, but instead became involved in the Land League agitation, which resulted in the first of several spells in jail. He was elected MP for Wexford borough in 1883, and subsequently represented Fermanagh North and Clare West.

He travelled extensively, raising funds for Irish political causes in Australia, New Zealand, South Africa and America. He was a popular figure in the House of Commons, passionate and theatrical as a speaker, although not rated a deep thinker. He was more progressive than his brother in his social and economic thinking, opposing the Boer War, while supporting women’s suffrage and old-age pensions. His belief that the Ulster Unionists could be brought round to accepting Home Rule, if the two traditions fought side by side, was one of the reasons he enlisted in the 16th(Irish) Division in World War I.

Despite his age, he went to the Western Front, from which he wrote regularly for the newspapers. He was badly shaken by the Easter Rising, which convinced him of the folly of constitutionalnationalism’s support for the war. However, he was much too chivalrous to think of deserting his comrades. On June 7th1917 he was mortally wounded in the attack on Wytschaete in Belgium, and buried in a convent garden in Loker. His death was widely mourned, and his bust by Oliver Sheppard stands in a park in Wexford town.

Extract from Clongownians of Distinction, A Guide to the Serpentine Collection, by Dr Harman Murtagh. Copies available from Ms Margaret Doyle (mdoyle@clongowes.net) – €20 – proceeds to the Alberto Hurtado Bursary Fund.