Choral Delights in the Library 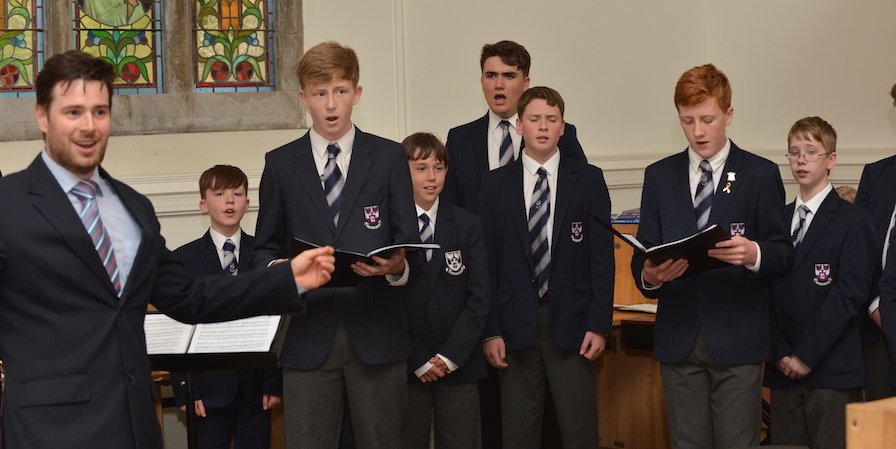 Last Tuesday (May 22nd) the boys of Transition Year hosted their Social Outreach visitors (and a few lucky members of staff) to a short concert in the James Joyce Library. The music was provided by members of the Clongowes College Choir and featured solo and choral performances of music by composers such as Rutter, Schubert, Gilbert and Sullivan, Hughes, and Coulter.

First into the lists was a novel performance of ‘Under Pressure’ by Queen, which (as conductor David Scott explained) was apposite for this time of examinations and applied to the first soloist, Ceallachan McDonald who, having reminded us how unhappy a policeman’s lot is, exited stage right and made a beeline for his textbooks. Musical accompaniment was provided by Ms Conaghan and Ms Heslin as the programme continued including two more solo performances Schubert’s Ave Maria by Hugo O’Donnell (fifth from left above) and one of Clongowes’ youngest singers, Sean Lannen of Elements (Herbert Hughes O Men from the Fields).

It’s been quite an eventful few months for the remarkable master Lannen (second from left above). In March – as a mere 12 year old – he entered his first ever competition at the Wesley Interschools Music Festival and was awarded first place in the Under 14 Solo, beating 19 other singers from schools around Leinster. Adjudicator Ms Lynda Lee of the Royal Irish Academy of Music said Sean’s performance was ‘mature, grounded and meaningful beyond his young chronological age’ and he received a gold medal and the Power Cup.

Sean was set to compete at more competitions, but misfortune struck in the week following his success at Wesley, when he suffered a broken collar bone on the rugby field. Apart from the discomfort, singing under such conditions is difficult, as his teacher Mr David Scott explains: ‘Much of the technique of singing is due to breathing and support, which was more difficult for Sean when his arm was in a sling. A broken bone can also create tension in the surrounding muscles, which can further inhibit relaxed vocal production.’

After visiting a specialist, Sean was told that he would not require surgery and during the Easter break he travelled to the prestigious Sligo Feis Ceoil. Again he was successful, receiving two silver medals in the Under 14 and Under 15 categories. The adjudicator Dr Joe McKee OBE remarked: ‘you have a distinctive quality to your voice which is very attractive.’

Although Sean’s arm was still in sling in May, he competed at the Navan Choral Festival this time performing in his own age group in the Under 13 Solo. Adjudicator, Mr Robert Deane, Professor at the Guildhall School of Music and Drama, London, praised Sean for the atmosphere he created when singing. This is the second year in a row a Clongowes student has been selected as the best Under 13 singer, following Matthew Cassidy’s (Rudiments) success last year.