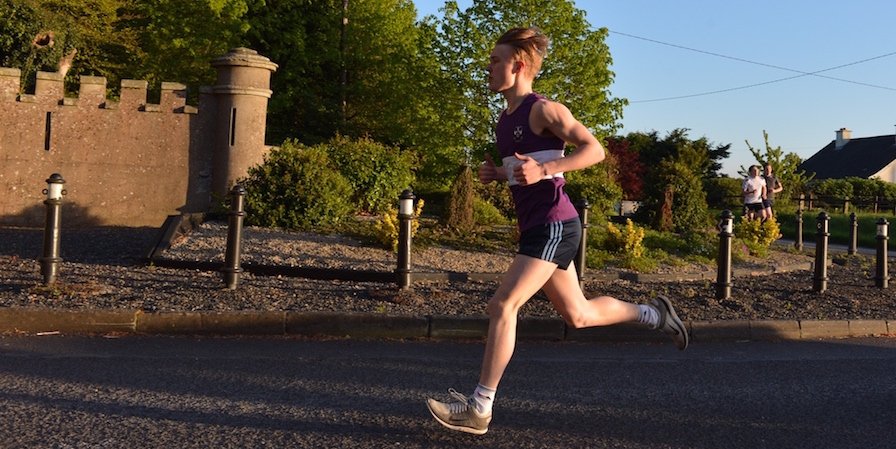 The origins of racing ‘The Triangle’ in Clongowes, while hardly lost in the mists of time, are certainly unclear. It is such an obvious course that it is likely that boys ran and raced it as long as boys have run and raced in Clongowes. As regards the modern event, Fr Bruce Bradley, in The Clongownian, 1994, points out that ‘an idea mooted by Fr Liam O’Connell during his headmastership was brought to fruition [this year] by Mr Brian O’Keeffe: races round the “triangle” of front and back avenues for all-comers within each line.’

For logistical reasons the latest running of the race (results below) took place in two instalments with the gentlemen of the Higher Line stepping out on Monday, 8th May in gloriously sunny weather while the rest of the school burnt up the course eight days later in slightly cooler conditions. Christian Casey (pictured above) won the blue riband event by 24 seconds and, while none of the remarkable Jack O’Leary’s (OC’16) records was threatened, there were some interesting features in the times. The 7.51 posted by James Coonan (Grammar) on the second outing would have eased him past his brother Charlie as well as Connor Mulholland (both Rhetoric) in the first race while the 7.55 of Robbie Savage (Syntax) equalled Connor’s time. (Charlie Coonan has been in touch to let us know that his sibling – James – has yet to surpass Charlie’s time of 7.42 set last year…).

Congratulations to all who took part in a very enjoyable event and many thanks to Mr Frank Kelly and all the staff members who made themselves available on the night to ensure the success of what has become a notable occasion in the ongoing history of Clongowes.