A Day For Rejoicing 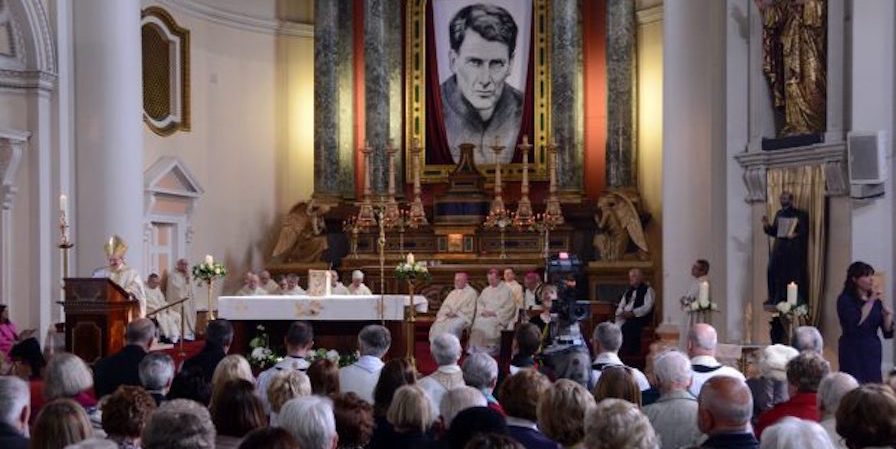 The first ever beatification in Ireland – that of Fr John Sullivan SJ – took place at 11.00 on Saturday, 13th May, 2017 in Gardiner Street Church, and it was a truly joyful and moving occasion. The principal celebrant and homilist was Cardinal Angelo Amato, Prefect of the Congregation for the Causes of Saints, and he was assisted by the Archbishop of Dublin, Diarmuid Martin, while the Church of Ireland Archbishop of Dublin, Michael Jackson, was also present.

The ceremony, attended by almost two thousand people in the church, church garden marquees, and Belvedere College, consisted of a Mass during which a formal request for beatification was publicly made. In an unprecedented ecumenical gesture, this request was made by the Church of Ireland and the Catholic Archbishops together, reflecting the fact that Fr John was an Anglican for the first half of his life and Roman Catholic for the second. In fact, the entire event is unprecedented, as there had never been a beatification ceremony in Ireland before.

In his homily, Cardinal Amato quoted frequently from the submissions of ordinary people to the cause of Fr John. ‘Witnesses in the diocesan processes often repeated that Fr Sullivan was ‘a poor man among the poor’, ‘the personification of the spirit of poverty’. Even though he came from a rich family, once he became a religious he was oblivious to comforts and contented himself with that which was purely necessary. Faithful to the vow of poverty, he gave immediately to others every gift he received.’ He described Fr John’s room at Clongowes: ‘…he had as his furniture a hard-word chair, a broken pitcher, a kneeler, some books, a holy water font, his crucifix from which he was inseparable, a little table, and a bed, even with few covers when the weather was colder.’

Rooted in a deep spirituality

Cardinal Amato also referred to an incident when Fr John, on one of his customary visits to the sick, encountered a priest already in the cottage visiting. ‘The pastor asked him to leave, fearing a dangerous opponent in the ministry. Upon his brusque command, Fr Sullivan knelt down and asked forgiveness. The pastor was profoundly moved.’ He referenced also his upbringing in the Anglican tradition. ‘Rooted in a deep spirituality already as a young Anglican, he sought and journeyed in his faith and in his life. He had a deep appreciation of the scripture which was nurtured from an early age at his school in Portora, and inspired within the rich faith life and prayerful tradition of his Anglican formation.’

Archbishop Michael Jackson said John Sullivan ‘had a special place in the hearts of all of us who are members of the Church of Ireland and of all of us who have an association with Portora Royal School and Clongowes Wood College.’ He said the day was one of celebration and joy. ‘We mark with the Jesuit Order in Ireland and world wide, along with the Christian Church everywhere, the beatification in the Roman Catholic tradition of John Sullivan SJ. We do so mindful of the unending need for reconciliation in Ireland and expectant of the abundant grace of God.

Fr John Dardis SJ, General Counsellor for Discernment and Apostolic Planning and former Provincial of the Jesuits in Ireland, spoke on behalf of Fr Arturo Sosa, leader of the Jesuits worldwide. He referenced Fr John’s Anglican background and paid tribute to the Church of Ireland today:

‘The Church of Ireland was the place where John Sullivan’s Christian faith was initially nurtured at home and in Portora Royal School. I pay a special tribute to that community of believers today. I mention The Book of Common Prayer through whose collects John would have learned to approach the Father of Mercies in reverence, humility and trust. Whatever theological differences we may have, our common belief in Christ is fundamental. We believe together that Christ is the answer that humanity longs for, the incarnate expression of the love and compassion of God. I pray that this beatification will lead to ever-closer collaboration and cooperation between our two Churches. I pray that together we can work to show that Christ is risen, that Christ is alive, that God’s mercy is for all, that God’s Word of forgiveness and love is spoken today, here, now, to us and to our friends and families just as it has been down through the centuries. I pray that, through this ceremony today, all of us can know ever more deeply this love, forgiveness and mercy. This is what John Sullivan himself would want.’

A teacher in Clongowes

He said that Fr John was a man who was held in great affection by Irish Jesuits. ’He was a teacher in Clongowes, where he was known for his compassionate attitude towards the students and also towards the local people especially those who were ill or those who were poor. The 1930s in Ireland was a time of great suffering and hardship – a time of great poverty. In this time of difficulty and poverty he stood out as a man preaching the compassion and mercy of God – themes close to the heart of Pope Francis. A central part of our role and mission as Christians is to be witnesses of mercy at a time when, our world all too often lacks a sense of forgiveness.’

Beatification, which confers the title ‘Blessed’, means that a man or woman is considered to be truly holy and worthy of veneration at a local level. The next stage after beatification is canonisation, sainthood, which is recognition of this holiness by the universal Church. For this process a further miracle is required, one which is confirmed to have taken place after the beatification. (See interview with Fr Toni Witwer SJ, Postulator for Jesuit causes.) Blessed John Sullivan’s reputation for holiness stemmed in great part from his untiring attention to the sick and the poor. Most of his priestly life was spent in Clongowes, and it was mainly in the towns and villages around this school that he spent so much time walking and cycling to visit those in need. After his death on 19 February 1933, devotion to him continued to spread. It remains lively in many places around Ireland, so a large crowd is expected to attend the event, including the sick and the elderly.

Other dignitaries in attendance included Fr Leonard Moloney, Irish Jesuit Provincial and Brendan Carr, Lord Mayor of Dublin. Also in attendance were members of Fr John’s family, most of whom travelled from England: Peter Lloyd and his wife, Sarah, and their two sons Hector and Joyelln. Representatives from Portora Royal School, Enniskillen, which Fr John attended in the 1870s, and Trinity College Dublin, where he studied Classics and Law, were also present.

Music during the liturgy was provided by students from Clongowes, while soprano Rachel Croach sang the Ave Maria and Panis Angelicus. Trumpeters and timpanists gave all present a heart-lifting moment during the Mass when a large portrait of Fr John was unveiled, just after he was declared ‘Blessed’. A new relic of his hair, which was kept by the Jesuit, Charlie Barrett, who acted as barber and cut his hair, was brought to the altar also at that point, along with the traditional relic card that holds a tiny piece of his very shiny, worn and frayed cassock.

After the ceremony there was time for quiet reflection, during which the hundreds of people present queued to receive a blessing from the Fr John Sullivan cross and the new relic and to venerate his tomb, the gates of which were opened specially for the occasion.

Copies of A Man Sent By God: Blessed John Sullivan SJ were on sale on the day. This new illustrated biography by former Messenger editor, John Looby SJ was published by Messenger Press to mark the beatification of Fr John SJ. It’s. The book is available to purchase for €9.95 here.

A Mass of Thanksgiving for the beatification of Fr John will take place in Clongowes on Saturday 20th May at 19.00. The principal celebrant and homilist will be Bishop Denis Nulty, Kildare and Leighlin. Further details will be posted on the Clongowes Website as they become available. For more on Fr John Sullivan’s close connection with Clongowes click here.